WHAT’S IT GONNA BE? 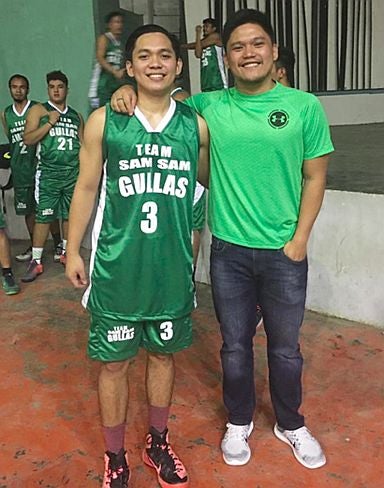 Samsam Gullas and Jun Manzo are all smiles in this photo taken last weekend during the Emil’s Cup tournament in Minglanilla. (CONTRIBUTED)

Days after UV confirmed Manzo’s return, Cager says he’s going back to play for UP

Just a few days after saying in another report that he was reneging on his commitment to UP and returning to the school that helped burnish his name as one of the best young prospects from the south, Manzo did a complete 180-degree turn and told Maroons assistant team manager Mel Macasaquit that he was returning to Manila on Tuesday to enroll.

“I spoke to (Jun) Manzo a while ago. He said that he never committed to go back to UV. He’s staying with UP. He’s flying back to Manila this week to enroll,” said Macasaquit, forging yet another chapter in what has been the most bizarre player transfer in recent memory.

It was just on Saturday that Manzo re-committed to UV via team manager and young solon Gerald Anthony “Samsam” Gullas. But upon learning of Manzo’s decision, UP’s management team cried foul and revealed that Manzo and fellow Cebu recruit Leonard Santillan have already signed contracts with them – something that Manzo himself confirmed.

But after speaking with Macasaquit on Monday night, Manzo has apparently changed his tune once more.

“I just told him that he is one of the best amateur guards that we have ever seen and that we’re putting our trust in him. He should also put his trust in us and how we can help him both on and off the court,” said the Maroons official.

“It’s not only a UAAP career that we are offering, it’s the chance to have the best education in the country.”

However, two sources within UV’s management team that Cebu Daily News spoke with revealed that Manzo has already enrolled in their school last Saturday and that he was leaving for Manila to just grab his belongings.

Informed of this, Macasaquit said that this tumultuous recruitment was one of their agendas during their management meeting on Tuesday morning.

“This is the first time we have gone through something like this. I have sent him text messages and called as well but he (Manzo) could not be reached. We have decided to give him until Friday to come back. If he doesn’t, we’ll let him go,” said Macasaquit. “However, we will pen a letter to the league that he intends to play in and attach the signed contract that he has with us.”

Cebu Daily News also tried to get in touch with Gullas but the affable politician and sportsman declined to make a comment on the issue.