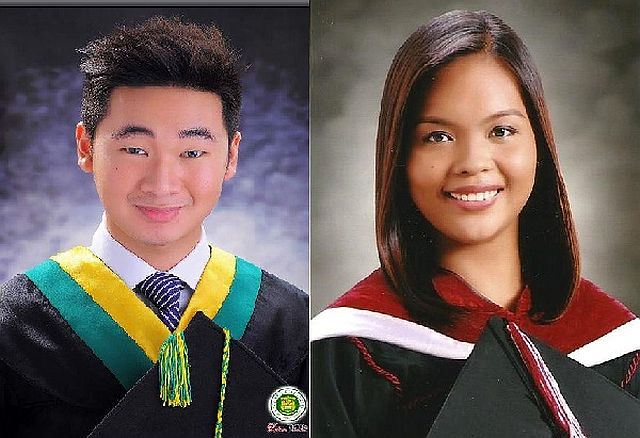 NOTHING is impossible when big dreams are coupled with sacrifice and prayer.

Such was the lesson shared by two young Cebuanos who recently topped the professional licensure examinations for Occupational Therapy (OT) and Physical Therapy (PT).

Still bursting with excitement, Marjorie Ceniza Arpon and Kent Russell Tiu Siady, both 22-year-old graduates of Velez College, shared their experiences with Cebu Daily News upon learning that they had topped the 2016 board exams for OT and PT respectively.

“If you dream, dream big. Nothing is impossible. Obstacles can make you stronger and fight your battles on bended knees,” Arpon told CDN after topping the OT August 2016 board exam with an average of 82 percent.

Arpon learned about the results last Wednesday when she personally checked the website of the Professional Regulation Commission (PRC) to see if the results were out.

“I checked the list of passers and successful top examinees. I was surprised, my name was there on the list,” said the number one OT board topnotcher.

Upon seeing the results, Arpon, the younger of two children, cried then rushed to inform her parents, both government employees, about her feat.

It was a dream come true for her, she said, as she had always wanted to top the board.

Meanwhile, on the very day Arpon saw her OT board results, Kent Russell Tiu Siady, also a graduate of Velez College, heard news that he had ranked fifth in the 2016 PT board exam with an average of 88.85 percent.

“I immediately dropped down on my knees to thank our Heavenly Father for this wonderful opportunity,” Siady said of the time when a teacher called him on the phone bearing news of his accomplishment. He was with his parents and brother when the teacher called.

“I actually did not know what to take up (for college) but after choosing Physical Therapy, I have grown to love it. I have no regrets. I know that what I will be doing will be a benefit to a lot of people,” Siady, the youngest of four boys from Guadalupe, Cebu City, told CDN.

For both Arpon and Siady, prayers and hard work got them to where they are today.

To prepare for the OT board exam, Arpon said she enrolled in a review center but also spent time doing self-review at home.

Though she had originally wanted to take up nursing, “I learned to love it (OT) and was focused ,” Arpon told CDN.

Aside from Arpon, two of her classmates from Velez College also made it to the top of the OT licensure exam.

Only 114 out of 229 examinees passed the OT licensure exam given last August 6.

Siady, for his part, advised future examinees to study hard but also take a breather from studies every once in a while.

“Be optimistic, take the examinations with positive mindset and of course, pray,” he said.

“I truly believe that faith, coupled with hard work is the secret,” he added.

Siady’s eldest brother is a microbiologist followed by a brother who is a cytogenetic technologist while his third brother is a registered nurse.

After passing the board exam, Siady plans to go on a two-year church mission with The Church of Jesus Christ of Latter-Day Saints.

“When I get back, I will go into medicine,” Siady said.

Along with Siady, another graduate from Velez College, Kevin Ramir Sy Java Jr., ranked seventh in the PT exam with an average of 88.25 percent.