Three years ago today, Erwin (real name withheld upon request) and his partner were headed to Manila from Butuan City on board the MV St. Thomas Aquinas to process his documents for his US trip.

The passenger vessel left the Butuan City port at noon and was scheduled to make a stop over in Cebu City in the evening before heading to Manila.

“That tragedy was really unexpected,” the 30-year-old Erwin said.

Erwin was among the survivors of that tragedy that claimed 116 lives.

There were 715 passengers and 116 crew members on board the vessel and 21 people were still missing.

Erwin recalled that he and his partner went to the vessel’s canteen to eat supper.

They lined up with the other passengers and ate there, then headed back to their room 30 minutes later.

As they walked past the lobby, they felt the ship shudder and shake violently.

“It was like an earthquake. I panicked along with everyone else inside the ship,” he told Cebu Daily News.

Erwin and his partner fell, but picked themselves up despite the pain caused by their fall and entered the main entrance to check what happened outside.

“Some people were running. When we checked outside, we saw Sulpicio Express Siete’s front section hit the MV St. Thomas Aquinas,” he said.

Thinking that the ship would sink, Erwin wanted to go back inside his room to get his suitcase and two backpacks.

“I was not able to get inside to get my things because my partner pulled me back. We looked for life vests,” he said.

But they saw only one life vest and Erwin’s partner gave it to him while they continued searching for another life vest at the third floor.

As they reached the third floor, power went out and the emergency lights turned on in each corner. 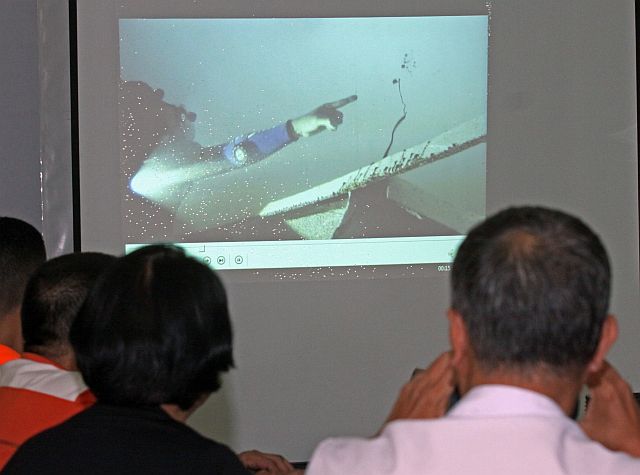 Marine biologists and local officials look at the video of the remains of the St. Thomas Aquinas vessel that sank deep in the waters off Lauis Ledge in these August 2013 CDN file photos.

“All I could hear people were screaming and crying. The ship’s alarm was also ringing,” Erwin said.

Erwin’s partner then decided that they had no choice but to jump off the ship.

They returned to the second floor. At first, Erwin hesitated to jump because he saw some passengers who jumped but got snagged at the propeller.
“It was like the movie ‘Titanic.’ It all happened within 15 minutes and the ship sank,” he recalled.

His partner jumped and he followed then then swam away from the vessel.

They stayed in the water for more than an hour before a cargo vessel passed by and rescued them.

Since he couldn’t shout, Erwin used the whistle attached to his life vest.

“I whistled many times before the people from the other vessel noticed our presence in the waters. They still continued searching for other passengers in the area,” he said.

At midnight, Erwin and the other survivors were brought to a private hospital in Cebu City where he was confined for three days.

The 2Go management paid for the hospital bills and booked them plane tickets going to Manila.

Now working at a spa in Valencia City, Bukidnon, Erwin said the ordeal that he and his partner experienced still haunts them to this day.

“I was so blessed that God gave me a second chance to live. I found the true meaning of life,” he told Cebu Daily News.