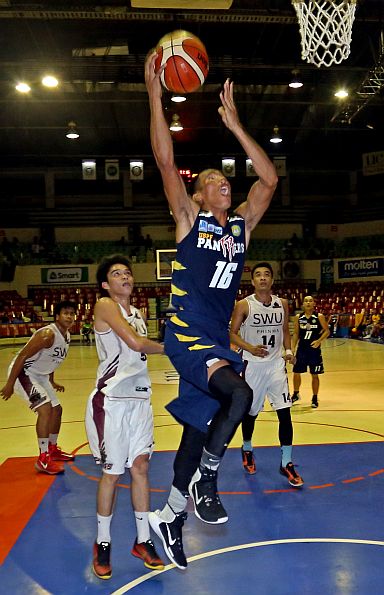 Gilbert Sastrillas of USPF lays it up in a Cesafi game against SWU at the Cebu Coliseum last night. (CDN PHOTO/LITO TECSON)

The Southwestern University (SWU)-Phinma Cobras spit venom in the face of the University of Southern Philippines Foundation (USPF) Panthers and came away with an 88–64 victory in the 16th Cesafi men’s basketball tournament on Thursday night at the Cebu Coliseum.

Comebacking big man Bernie Bregondo held the fort down low as he scored 14 markers and grabbed 11 boards. Ian Ortega came off the bench and contributed 10.

More importantly, SWU now holds a share of the lead alongside bitter rivals, the University of the Visayas (UV) Green Lancers at 3–0 (win-loss).

The Cobras came out on fire and raced off to a 27-10 lead capped by a buzzer-beating jumper by Luz.

But the Panthers came back and pulled to within five, 31–36, behind their frenetic brand of defense that forced the Cobras into hurried shots and careless turnovers.

However, Luz connived with former Adamson guard William Polican to score the last nine points to raise the lead back to 14, 45–31, at halftime.

Later, Tallo found his groove and scored on a gorgeous lay-in and a corner triple while rookie forward Arnel Molina added a putback to push the Cobras in front by a whopping 24 points, 63–39, 2:03 left in the third.

Roy Quiatchon and Gilbert Sastrillas each had 10 for the Panthers which lost for the third time in as many matches.
CEC crushes USC

The victory was their second in a row after opening this season with a loss to place their win-loss record at 2–1.