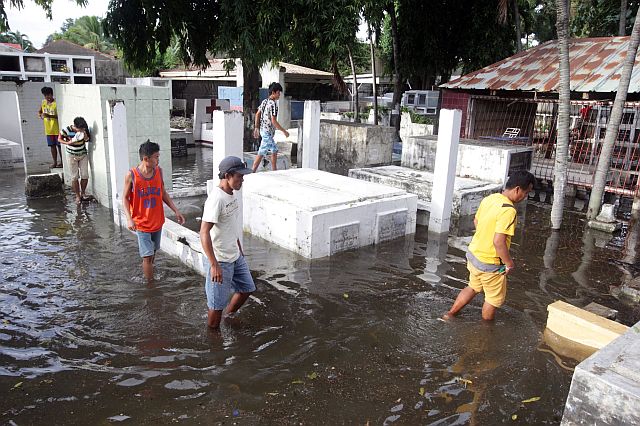 Relatives wade through the floodwaters to visit the tomb of their dearly departed in a Barangay Gun-ob cemetery in Lapu-Lapu City (CDN PHOTO/TONEE DESPOJO).

THE ankle-to-knee-deep waters flooding the municipal and protestant church cemetery in Barangay Gun-ob, Lapu-Lapu City, failed to stop some visitors yesterday from visiting the tombs of their loved ones there.

These visitors, who wanted to avoid the All Saints’ Day and All Souls’ Day crowd at the Lapu Lapu City United Church Cemetery, wore rubber boots and waded in the flooded cemetery to reach the tombs of their loved ones to offer flowers and light candles there.

One of these visitors was Roel Patalinghug, 50, who did not only bring a pair of boots but also a green, plastic bag big enough to fit three pairs of rubber boots.
Around 4 p.m., Patalinghug, his sister and his nephew visited the flooded cemetery where their grandparents were buried. They carried with them two baskets of flowers which they placed right on top of the grandparents’ tomb.

“We have rubber boots so it (floodwater) is not a really big problem. The water is still deep though. We decided not to bring our little children because we’re afraid they might catch dengue,” he added in Cebuano.

He also said that they agreed not to bring food to the cemetery, which according to him, they usually do every year.

According to the cemetery caretaker, the water was waist-deep after the heavy rains last Saturday evening.

It receded but the knee-deep water remained.

The Lapu-Lapu City government and Barangay Gun-ob Captain Jose Dungog, who was informed of the cemetery flooding, had already sent Clean and Green personnel with suction pumps to siphon the water pooling in the cemetery.

Dungog said that the cemetery was flooded because the drainage in the area had not yet been upgraded.

Meanwhile in Cebu City, officials noted minor concerns during inspections in some of the city’s cemeteries.

Alcontin also advised the management of cemeteries to monitor vendors inside the facilities, who are using butane canisters, and to make water available for their comfort rooms.

“We have asked cemetery administrators and managers to help regulate the use of butane canisters being used by vendors in cooking because we don’t know there may be leaks and there are a lot of people visiting the cemeteries,” he said.

He said there were no concerns in other areas like the Pardo Cemetery and Carreta Cemetery.

He said command posts have been put up as well as medical emergency posts and ambulances are on standby.

He said the personnel assigned in the cemeteries will be present until tomorrow, November 2. They will only be pulled out by 6 p.m.