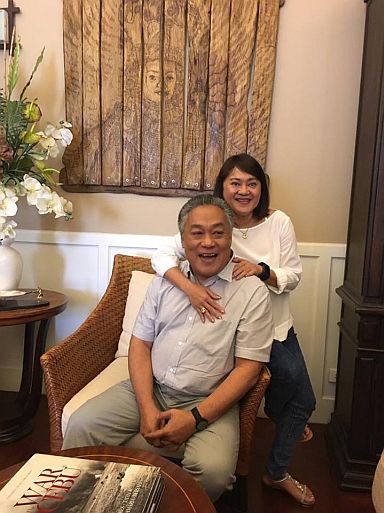 Governor Hilario “Junjun” Davide III and his wife, Jobella Angan Davide, giggles with reporters during a light-hearted interview where they talk about their relationship that spans almost three decades. They are each other’s first love and best friend.
CDN PHOTO/IZOBELLE T. PULGO

(Editor’s note: The seventh in a series of CDN stories to show that there are indeed certain things that last forever.)
#CDNMAYFOREVER

The story of Cebu’s first couple

If there is one word to describe the love story of Cebu Governor Hilario Davide III and his wife, Jobel, it would be “classic.”

From meeting in high school to becoming sweethearts soon after, through dealing with a long-distance relationship in college in between love letters and phone patches to eventually tying the knot, their love story is indeed typical of a first love that never dies.

Known simply to many as “Junjun,” the two-term governor is a lawyer by profession.

His wife, Jobella, better known as Jobel, is a businesswoman.

It was in 1977 when their story began, just as both started high school at the University of the Philippines – Cebu Campus.

A transferee from Manila, Jobella caught the eye of Junjun because of how she spoke.

“Akong father-in-law bag-o lang to na-assign as provincial commander diri sa PC, which was in 1977,” he added.

(My father-in-law was just recently assigned as the provincial commander here of the the Philippine Constabulary, which was in 1977.)

Junjun eventually courted Jobel in the classroom during lunchtime, a meeting that was arranged by a classmate, Rannie del Mar, son of Cebu Rep. Raul del Mar.

(Class was already dismissed and the meeting was arranged by Rannie del Mar, who was our classmate in freshmen. We talked and immediately we went steady.)

As he was recounting the events to CDN, Junjun corrected himself as he later recalled that he had actually called Jobel for her answer after that talk in the classroom.

(Oh I remember. I had to call you to ask what your answer was.)

Asked how long he had courted his wife, Junjun unabashedly revealed that he had wanted an answer from her after only two days.

(It took a very short time, less than a week.)

(We talked now, two days after I called her to ask what her answer would be. She said, ‘Yes, but be loyal.’ I will never forget that. That’s what she had wanted so I’ve been loyal for 29 years.)

After 29 years of being married, the couple could still remember each other’s old phone numbers up to this day.

Of Love Letters and Phone Patches

According to Jobel, they were each other’s first love, but their young relationship had a rocky start.

They broke up freshmen but eventually got back together when they got to junior year.

After graduating from high school in 1981, Junjun went to Manila to study Bachelor of Arts in Political Science at the University of the Philippines in Diliman while Jobel remained in UP-Cebu.

It was during these years that they resorted to sending letters at least twice a week in order to keep in touch as long-distance phone calls were too costly for them.

(We just wrote letters. We now have a treasure chest of love letters.)

(Almost every week, we got letters from each other. But she always wrote first.)

In addition to writing letters, Junjun and Jobel kept in touch through “wig-wag,” a military-phone system where calls were patched from one point to another to reach the recipient.

(My father used to be in the military so we lived in Camp Sotero. We could not make long distance calls because we had no work.)

(So we used wig-wag, the military line. Phones were patched. It was a very long process. And then when finally the phone rings in their house, I’m told he’s out. But that’s how it was because it was free. Junjun would be scolded if he called long distance.)

To this day, Jobel keeps an album of mementos that remind her of those times. 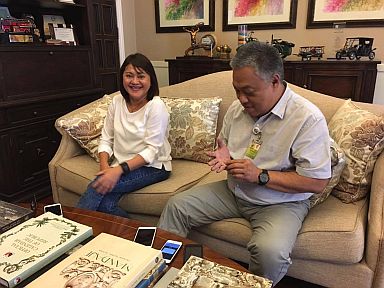 In Between Family and Politics

On July 4, 1988, four months after he proposed and a decade since their story started, Junjun and Jobel, both 23, finally tied the knot.

“When you marry, it’s not a bed of roses when you enter into a relationship. We have many trials even until now. But we always try to patch things up,” Junjun said.

Both valuing privacy, it was especially challenging for them when Junjun, then a practicing lawyer, decided to enter politics.

(The children and I were not in favor of it because we are very private people so we really had to adjust.)

“As a wife, I have to embrace this kind of life to fully support him,” she said.

Junjun served as Cebu City councilor before running for governor. After losing in his first attempt, he eventually won against reelectionist Gwen Garcia in the 2013 elections.

For the Davides, Sunday is always family day although there are really times that duty calls, said Jobel.

According to Jobel, it helps that she considers Junjun as her best friend who can be told everything, and humor has always been present in their marriage.

“One of the good things in our marriage is that we laugh together,” she said.

Despite his very busy career, Junjun has always been very active in their children’s lives.

“We always try to be present in all of our children\s affairs in school, graduation, family day, report-card getting, mga special events in the school ba,” he said.

Despite arguments and misunderstandings at times, Jobel said love is knowing that they are “committed to each other and we cannot live without each other,” Jobel said.

For Junjun, love is a gift from God that must be nurtured and developed.

“All I know is that love is God’s gift to humanity. It’s up to us to nurture it with someone,” said the governor.

There’s this persistent longing for somebody bitaw, mawa lang kadyot (she’s gone for a while), you long for her.

Jobel, on the other hand, sees forever in finding one’s soul mate.

“Like when we arrived from Cape Town, he said he will wait for me in Cebu since he wasn’t able to go with me pero tua diay siya sa Manila, ga-atang na nako. (But then I see him in Manila to pick me up) It’s the little things, the surprises.”

This Valentine’s Day, Junjun said, will be no different than their usual simple celebrations.

“We do not pray for comfortable lives. We pray nga mu-strengthen pa gyud atong faith sa Ginoo, that we be more persevering sa atong partners, and as Jobel said, there should be love for one another, respect, to value each day that you’re together,” Junjun said.

“It’s still an imperfect marriage but we try to make do sa among relationship and we are thankful that God has blessed us so much,” he added.