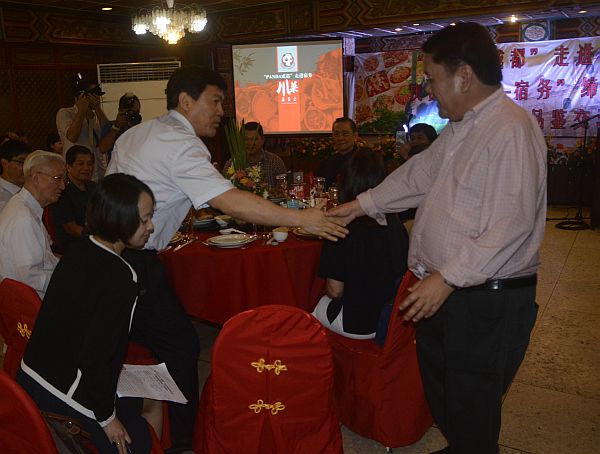 Mayor Osmeña greets Chengdu Mayor Lu Qiang at the White Gold House where they were having dinner after signing the sister-city agreement.
cdn photo/christian maningo

No neckties were worn that evening.

The heads of two cities — Cebu City Mayor Tomas Osmeña and Chengdu Mayor Lu Qiang — wore long-sleeved shirts and pants, a deviation from Wednesday afternoon’s formal attire of full suit and tie during the signing of the sister-city agreement between the two governments to foster economic and trade relationship.

The White Gold House was in festive mood as it was decorated with red lanterns and crimson tablecloth.

Local government officials, Cebu’s Chinese community and some members of the diplomatic corps arrived one after another. Mandarin Chinese was a common language spoken by almost everyone.

As Filipino-Chinese and Cebu-based entrepreneur Wilson Ng announced the start of the program, guests settled down, excited to experience the reason of that night’s gathering: to savor dishes of the famous Sichuan cuisine.

The delegation from Chengdu, led by Mayor Lu and some 14 Chinese teachers, came to Cebu for a three-day visit.

“This new relationship between Chengdu and Cebu proves our ability to reach out to communities around the world,” said Osmeña, who visited Chengdu last month.

Unlike Cebu, Osmeña said Chengdu does not have a coastline despite the fact that its 16 million people consume 100 tons of various fish and seafood every year.

Osmeña said this posts a big market potential for Cebu.

Shi said there are now 10 direct flights to Cebu from mainland China. Eighteen months ago, there were no direct flights. Only Cebu Pacific flies direct from Cebu to Hong Kong, a special administrative region of the People’s Republic of China.

“The Philippines and China are neighbors enjoying traditional friendship. With direct flights and this sister-city agreement, more Chinese companies and organizations are coming to Cebu for opportunities and investments. This shows the sincerity and determination of Chengdu to further develop friendly relations,” Shi said.

Mayor Lu said the direct flights between Cebu and Chengdu will not only bring growth in tourism but will also foster opportunities on economic cooperation, trade and investments and education.

Former Ambassador to the People’s Republic of China Francisco Benedicto said he is confident that the partnership between Cebu and Chengdu will promote opportunities in import and export, joint business ventures, trade missions, cultural exchange and tourism growth.

Read Next
Gearing up for coming floods