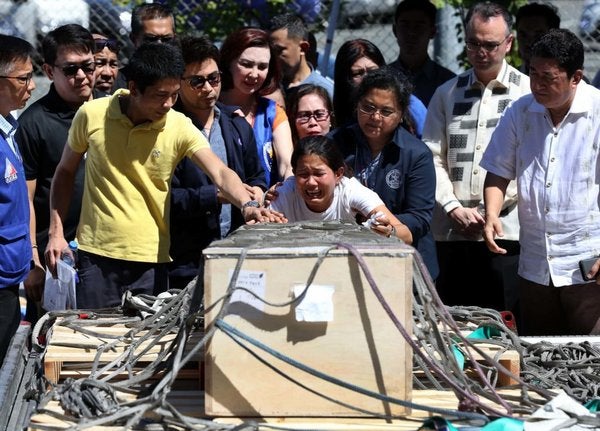 As government officials look on, Jessica Demafelis weeps while hugging the sealed casket of her sister, Joanna, whose remains were flown in from Kuwait on Friday morning. /Inquirer photo

THE SUSPECTS in the murder of overseas Filipino worker (OFW) Joanna Demafelis in Kuwait have been arrested by Lebanese authorities, the Department of Foreign Affairs (DFA) revealed on Friday evening.

They were identified as the principal suspects in the torture and murder of the 29-year-old domestic helper.

Demafelis’ remains were found in a freezer early this month in an apartment abandoned by her employers in Kuwait. An autopsy report showed she was severely beaten before being placed in the freezer more than a year ago.

“Kuwaiti authorities requested the assistance of Interpol in locating and arresting the couple who they believed fled to Lebanon or Syria shortly after the torture and murder of Demafelis,” Cayetano said in a statement.

“Kuwaiti authorities conveyed the arrest of Assaf to Ambassador Renato Villa during a meeting at the Ministry of Interior on Thursday,” he added.

Cayetano said President Rodrigo Duterte has already been informed of their arrests.

“The President welcomes the news that Nader Essam Assaf is now in the hands of authorities in Lebanon,” Cayetano said