NBA Premium on Sky: Subscribe for 2 months, get 1 month free 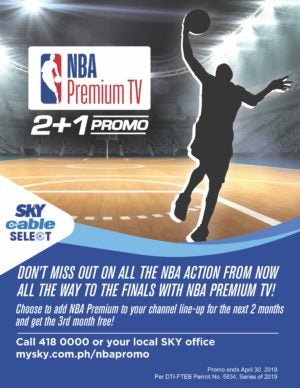 It’s Playoff time in the NBA and SKYcable Select’s NBA Premium TV 2+1 Promo offers the best value-for-money entertainment, as it gives fans an extra month of free access to the hottest on- and off-court action just as the chase for the Larry O’Brien trophy heats up.

Fans only need to avail of two consecutive months subscription to get one month free and get their fill of everything about the NBA. NBA Premium TV features live games daily, analysis programs, basketball magazine shows, news, and other specials. It also offersprograms that feature the lives of individual basketball players, documentaries focusing on a particular NBA team during the season and archived broadcasts of well-known games

There’s no more fear of missing out when the next big Stephen Curry or Kevin Durant scoring binge propels the Golden State Warriors over their first round opponent, which is a selection between Los Angeles Clippers in the bloody Western Conference wars. Other teams fans should look out for include the Denver Nuggets with their All-Star center Nikola Jokic, the Oklahoma City Thunder of Paul George and Russell Westbrook, the Portland Trailblazers with Damian Lillard, and the Utah Jazz anchored by Donovan Mitchell and Rudy Gobert.

In the East, fans can expect fresh faces since Lebron left to join the Los Angeles Lakers who are now out of contention. See if potential MVP Giannis Antetokounmpo can keep his team, the Milwaukee Bucks on the winning column and if the struggling Celtics have a sudden resurgence that can push them to the playoffs.

Don’t miss out on the most important time of the NBA Regular Season. Subscribe now and enjoy the ultimate NBA action coverage and updates, from Playoffs all the way to the Finals. The offer runs from April 3-30, 2019. Existing NBA Premium TV subscribers can also avail this promo by calling the hotline.

NBA Premium TV is available in SD for P200/month, and in HD for P350/month. Visit mysky.com.ph/nbapromoor call 4211818or any SKY local office to subscribe.