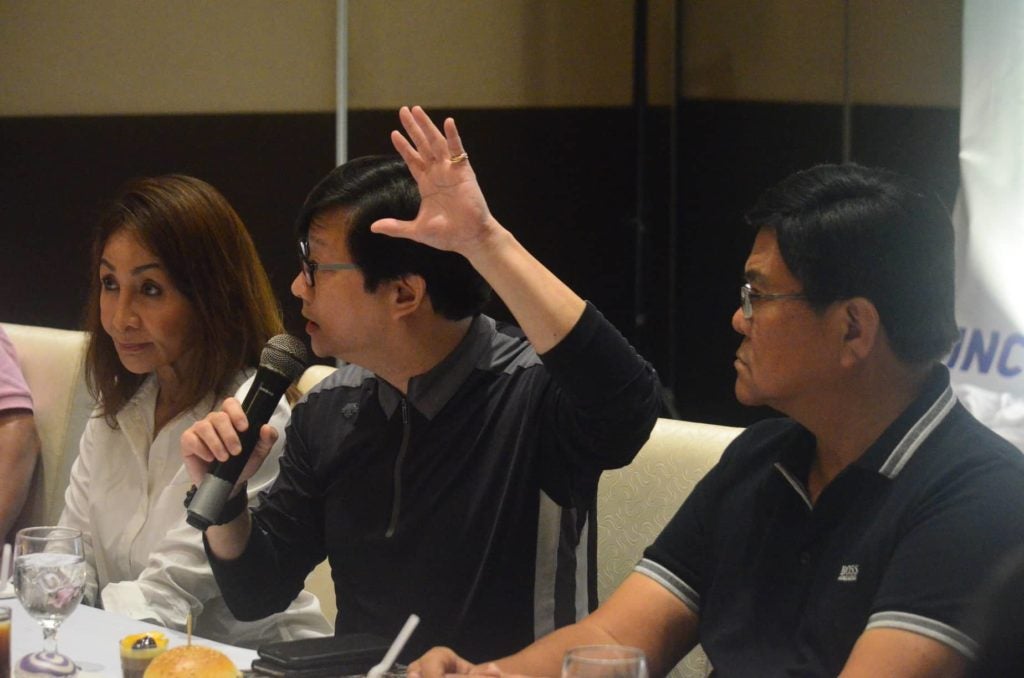 Presidential Assistant to the Visayas, Secretary Michael Dino (center), talks about the chances of the light railway transit being bright with Governor-elect Gwen Garcia and Cebu City Mayor-elect Edgardo Labella being the heads of their respective local government units during a solidarity meeting in Cebu City on May 25. | Gerard Vincent Francisco

CEBU CITY, Philippines — With allies taking the executive seats of the Cebu Provincial government and the Cebu City government, Presidential Assistant to the Visayas, Secretary Michael Dino, is positive that the Light Railway Transit (LRT) will soon be realized.

Dino, who joined Governor-elect Gwendolyn Garcia and Mayor-elect Edgardo Labella in their Unity and Solidarity meeting on Saturday, May 25, said that the President would fulfill his promise to push through with the LRT in Cebu.

Dino said the national government would more likely help a province with its local government units (LGUs) united in the same vision of development as the President.

He said that with Garcia and Labella, the Metropolitan Cebu Development Authority (MCDA) would be able to continue its projects for Metro Cebu.

One of these projects is the plan of an LRT to connect Metro Cebu from end to end. Dino said this would be the backbone of an integrated intermodal transportation system.

Dino said that the LRT had actually done its feasibility studies and awaited the approval of the National Economic and Development Authority (NEDA).

He said it would soon be up for a Swiss Challenge.

“Kanang BRT (Bus Rapid Transit), murag feeder lang na siya. Ang main artery nato should be LRT. (The BRT will serve only as a feeder. The main artery of our transport system should be the LRT),” said Dino.

For her part, Garcia said she believed the solution to traffic could be solved through coordination of the LGUs in Metro Cebu as traffic had not only been limited to Cebu City.

She said the integrated intermodal transportation system should solve the traffic from all corners of Metro Cebu and even beyond if needed.

Metro Cebu begins from Danao City in the north and ends with Carcar City in the South and extend east to Cordova town. Thirteen LGUs form Metro Cebu.

For Labella, he said, that the first leg of the LRT construction might focus in Cebu’s City Center to the Mactan International Airport.

He also said he agreed that the LRT should be the primary transport system in Cebu since this would integrate all of Metro Cebu and not just Cebu City alone. ###

The virus is the enemy, not the government

Police: Man nabbed with P31M drugs is not a Grab driver