The Plastic Barter Store was formally opened to the public on Saturday, June 15. /Photo from the 12 Baskets Movement Food Bank and Plastic Recycling Facebook page

(It’s been a while since I last wore a brand new pair of slippers.)

Manong Boy was just one of the regular visitors of the store which opened on June 15 to cater to people who wanted to trade recyclable plastic containers and garbage with used clothes, food or a pair of slippers among others.

Adrian Lee of the Rotary Club of Metro Cebu said that they will later on use the plastic that they will collect for the production of eco-hollow blocks as a livelihood project under the 12 Baskets Movement.

Lee said that the clothes and other goods that they give out in exchange for plastics are from donations. 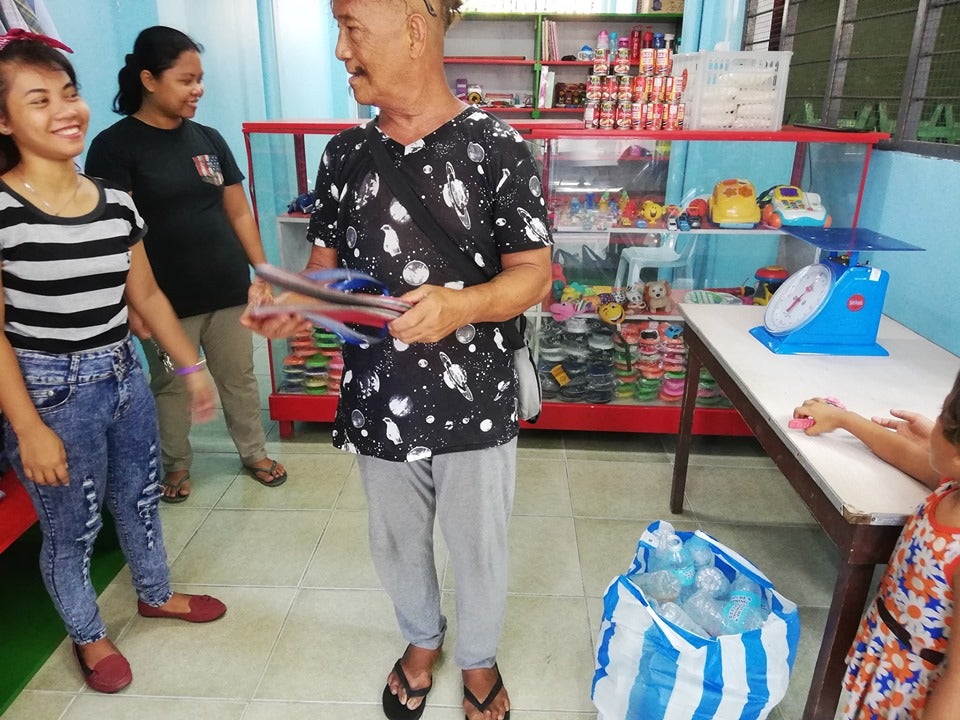 Manong Boy received a new pair of slippers in exchange for plastic water bottles that he brought to the barter store. /Photo from the 12 Baskets Movement Food Bank and Recycling Center

Their store is open from 9 a.m. to 3 p.m. from Mondays to Saturdays.

Lee said that 12 Baskets Movement Food Bank and Recycling Center entered into a Memorandum of Agreement for use of a portion of Balay Samaritano compound for the establishment of the Plastic Barter Store.

Lee said they thought of opening the store “to create awareness among the community especially the urban poor street dwellers, riverside informal settlers, and urban poor on the city’s plastic waste problem and encourage them to keep and exchange plastic waste for food, toys, clothes that will be distributed in Plastic Barter Centers, pop-up stores.”

He said that plastic garbage that are brought to their store will be weighed by attendants. Clients will then be asked to pick what items they would want to exchange their plastic garbage with based on a per kilo value.

Lee said that under their 12 Basket Movement, they are able to help rid city streets of plastic garbage while at the same time teach the community the value of sharing what they have in excess with the less fortunate ones.

They also plan to sell some of the recyclables that they will collect to earn funds that they will use to pay for the to allowances of their store attendants and take care of their fuel needs and electricity expenses. Part of their revenues will also be spent to restock their barter store. A girl picks her choice of toy to barter with the plastic garbage that she brought to the barter store. / Photo from the 12 Baskets Movement Food Bank and Recycling Center

While they encourage barter, Lee said that for now, they discourage companies and households from donating their plastic garbage to their store.

“But if our demand for plastic increases we may come up with a system to accept their waste,” he said.

Lee said they would rather have cash donations from private individuals to help sustain the operation of their barter store.

“All cash donations will be issued receipts by Rotary Club of Metro Cebu. Checks must also be in the name of the club…. and we must inform the club that this is for the 12 Baskets Movement,” he said.

Lee said that as a long-term plan, they also wanted to open an eco-hollow blocks center at the San Pio Village in Barangay Dumlog, Talisay City for the manufacture of hollow blocks that they plan to sell in the future using the plastic bottles and garbage that they would collect through their barter store.

He said that the Justice, Peace and Integrity of Creation- Integrated Development Center (JPIC-IDC) has allowed them use of their Talisay City property for the establishment of their eco-hollow blocks center.

Lee said that they will soon be screening scavengers from the dumpsites in Talisay and Mandaue Cities to consist the cooperative that they plan to create to operate the center./dcb