Fun under the rain, kids using a parking ramp as a makeshift slide 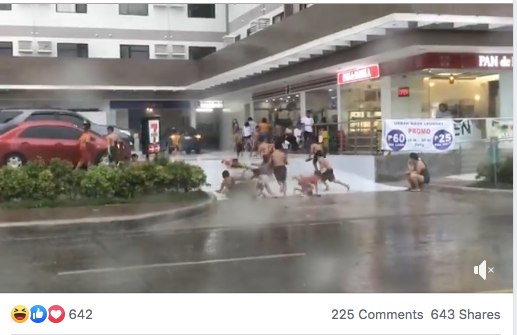 A screen grab photo of the video posted by Seismundo.

CEBU CITY, Philippines— The heavy downpour last, June 23, Sunday brought out the fun in some of the kids along Salvador Extension in Barangay Labangon, Cebu City.

It was also the day that Ryan Redentor Seismundo, 21, a freelance photographer, stopped for a sight that’s worth recording.

“I was on my way to Banawa to hang out with my cousin, then I saw these kids were enjoying the rain and were sliding in a ramp in a parking lot in a condo” he said.

Seismundo also said that he was scared while looking at the kids because they might go straight to the streets, but a closer look at them sliding on the ramp showed that they had plenty of space to stop them from reaching the main road.

“Luh lingawa oy” these were words he uttered upon seeing the kids playing.

He said that was also the reason he recorded a short video of the group of young boys making the most of the rain, having fun and enjoying every minute of it.