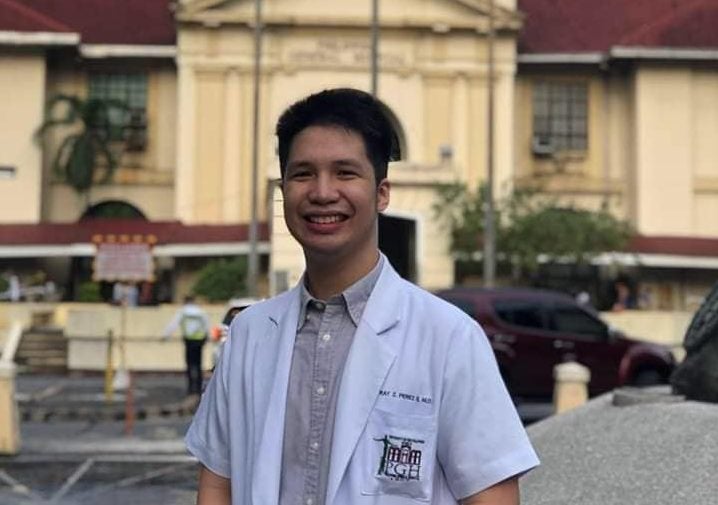 That is why he wanted to become a doctor.

The University of Santo Tomas’ Federico Adriano Peralta IV topped the exams with a rating of 90.92 percent.

Amazingly, this is not Perez’ first time to be part of the top ten in a board exam.

In 2013, Perez actually topped the Medical Technologist licensure examinations with a rating of 92.10 percent.

For Perez, topping the board exam—twice— is the reward for all the hard work he put into his studies.

“My driving force for this goal was just the recognition that the opportunity to study medicine is a blessing and a privilege, and so I had to make the most out these God-given blessings,” he told CDN Digital.

Perez actually comes from two known clans of medical practicioners: the Zanoria clan and Perez clan, whose names are etched in hospital directories around Cebu.

His greatest inspiration is his father, the older Doctor Ray Perez, whom he describes as someone who was always on the go being a doctor.

Coming from a family of doctors, Perez dreamed at an early age to be part of the medical industry. His success only shows his determination.

“It’s actually more like a marathon than a sprint, which is the part that makes it the most challenging and the most rewarding. You always have to be consistently doing your best, which is just at par for the course, as we are handling actual lives and anything less would be a disservice,” he said.

Another motivation for Perez is the belief that all patients deserve the best doctors since they have placed their lives in the hands of these medical professionals.

Saving lives is not Perez’s only way of paying it forward.

As a licensed Medical Technologist, Perez also took a teaching stint in his Alma Mater, Velez College, right before he entered CIM in 2015.

He also served as a reviewer at the ACTS Medical Technology Review Center, imparting knowledge to future medical technologists.

For Perez, helping people in whatever way is the ultimate success in whatever profession.

As of now, the new doctor is scouting the field for the next step of his journey, getting a residency specializing in Internal Medicine.

Although he does not know where he will be serving as a full-fledged doctor, he said that as long as he feels like he has done something good for his patients and for the country, he will be more than satisfied.

He also plans to teach again in the future so he can guide future medical practitioners.

Perez said he is grateful to God for the privilege to become a doctor, and he promised to be God’s hand in healing people.

His message to future doctors is to keep the faith and never fear failure.

“Medicine is not a right but a privilege. All the money spent on tuition, books, studying out, all those sleepless nights, the emotional roller coaster that is medical school, will all be worth it in the end; that is, only if one puts it in the proper perspective. Stick with it. Pray hard and work hard,” said Perez. /bmjo