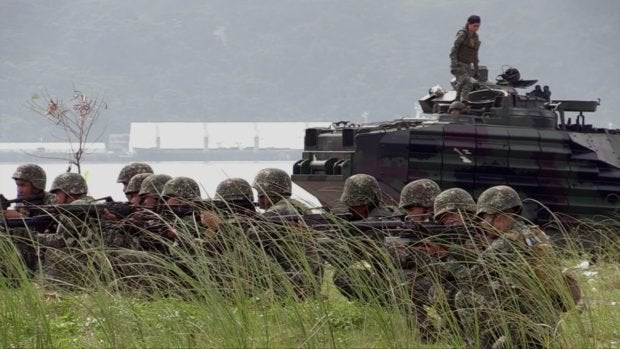 Tanghap said the AAVs can be deployed for combat and for rescue operations. “Considering that the country is frequented by storms, the AAV plays a big role in disaster retrieval operations,” she said.

The activity was originally scheduled on Thursday (Sept. 19) at the Naval Education and Training Center in the Zambales town of San Antonio,  but it was moved on Saturday because of bad weather.

The drills, a part of the main events under the ongoing AFP Joint Exercise (AJEX DAGIT-PA), used a portion of Subic Bay, Zambales, part of a former US naval base facing the West Philippine Sea.

The four AAVs were launched from the Philippine Navy’s BRP Davao del Sur (LD-602) to carry out the the ship-to-shore operations.

But for Lt. Col. Henry Espinosa, commander of Amphibious Landing Force, Saturday’s joint drills were historic because it is the first time that the Philippine Marines used its own AAVs for ship-to-shore exercises without the United States.

“Matagal na naming ginagawa ito with our counterparts with US Marine Corps. But what is significant, historical and unique kasi ginamit natin yung sarili nating AAVs. For the longest time, nagko-conduct kami ng ganitong exercise bilateral with the US Marine Corps. Right now, we are doing it on our own unilaterally,” he told reporters.

The Philippine Marine Corps has a total of eight new AAVs from Hanwha Defense, formerly known as Hanwha Techwin. Four of these have yet to be commissioned next week.

The joint exercises kicked off on Sept. 16 and will run until Sept. 27. It is conducted across different areas in Luzon — Zambales, Nueva Ecija, Tarlac and Palawan.

Man found dead hanging on tree by 4-year-old daughter in Negros Or. town