PH embassy cautions Filipinos in US amid rising anti-Asian attacks 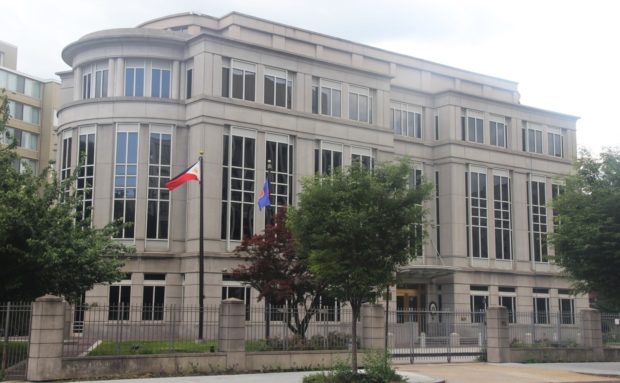 Embassy of the Philippines in Washington, DC. (Image from the DFA website)

MANILA, Philippines — The Philippine Embassy in the United States advised Filipinos there to exercise “utmost caution” as it voiced concern over the rising number of attacks against Asian Americans.

“We note with concern the rise in attacks on Asian Americans in various parts of the United States,” the embassy said in a statement Friday.

“Filipinos are advised to exercise utmost caution in view of these incidents,” it added.

While the embassy acknowledged the “swift action” taken by local authorities on such attacks, it called for further protection of people of Asian descent, including Filipinos.

“The Philippine Embassy and Consulates General in the United States appreciate the swift action taken by a number of local authorities to apprehend perpetrators of these attacks,” it said.

“However, we call on federal, state, and local authorities to further ensure the protection of persons of Asian descent, including Filipinos,” the embassy added.

The rising number of attacks against Asian Americans has triggered protests held by local community groups, activists and policymakers in the US.

Since the beginning of the Covid-19 pandemic, there has been a dramatic increase of reported assaults against Asian Americans.

There were 2,100 violent acts directed towards Asians in between March and June 2020 alone.

Recently, elders within the Asian American community in the Bay Area have experienced violent assaults, most notably 84-year-old Vicha Ratanapakdee who was killed after an assault in San Francisco on Jan. 28.

A Philippine lawmaker has recently called on the Department of Foreign Affairs to ask US authorities to take measures on hate crimes against Asian Americans.

“I request the Department of Foreign Affairs to express to the United States authorities, through our embassy and consulates, the necessity of protecting our citizens and fellow Filipinos,” Ako Bicol party-list Rep. Alfredo Garbin Jr. said.

“The US authorities should undertake effective responses to the racially-motivated hate crimes, including their root causes,” he added. with a report from Miguel Carrion/INQUIRER.net U.S. Bureau

Read Next
UV sports officials remember Gullas: ‘He was like a father to us’