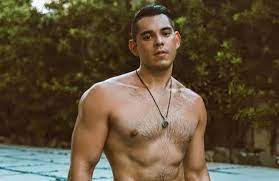 “I’m here to formally say that I am a proud member of the LGBTQ community. And it feels great saying that publicly because I am.

“I am out to a lot of my close friends and I’m lucky that I have that support system around me to give me the confidence to really accept who I am and to love myself because not a lot of people have that?” ang simulang pahayag ni Raymond sa interview ng MEGA Entertainment.

“Growing up, it was hard for me to even acknowledge even who I am. Like, what is this?

“I had my brother who was so similar to me but so different in so many ways. But he never had to explain his sexuality, so why should I? And that was my thinking growing up.

“But then entering show business at 19, well, I was a kid, but going back again to show business at 19 to be a TV host, that’s when it really hit me that, ‘Wow, being gay is really not accepted in a lot of these communities,’” sabi pa ng anak nina Annabelle Rama at Eddie Gutierrez.

“Back then, being the new person on TV, I was bullied by a lot of the older people in the studios. Being gay now is not the same as being gay back then. 10 years ago, it was totally different. You feel like a mutant?

“You walk in to backstage and people will say, ‘Ah, ‘ di ba ‘yun ‘yung baklang kapatid ni Richard?’ Like, I can literally hear them.

“And because of those moments where people really wanted to put me in a corner and really label me and kind of diminish my skills and diminish what I can bring to the table because of my sexual preference (that I didn’t even realize, I didn’t even know at that time?)

“I was still going through so many emotions at that time that I had no idea. Like, ‘Can I go through this first before you label me anything?’” aniya pa.

Isa pa sa inaalala niya ay ang image ng kakambal niyang si Richard, “And nu’ng time na ‘yun, siyempre, being part of a family that is in the public space, we’re all entertainers for many generations already, I wasn’t deciding on things just on my own?

“Things that I do will not only affect me, but will also affect my family. So, that was kind of like the burden that I was carrying? Like, I can’t be gay because my brother is a superhero, right? So, that was… well, it’s tough for me,” paliwanag ni Raymond.

“So I’m doing this now just because I’ve had so many learnings during the pandemic that maybe not a lot of–maybe a lot of people are going through similar situations as me.

“I wanna empower those people. I wanna tell them that ‘You’re not alone. I was going through the same things.’ For me, it’s — sexuality is just one aspect of who you are. It doesn’t define who you are,” sabi pa niya sa nasabing interview.