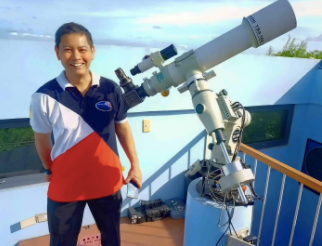 MANILA, Philippines — An eight-kilometer-wide asteroid between the orbit of Mars and Jupiter was recently named after a Filipino neurosurgeon.

The Working Groups for Small Body Nomenclature bulletin of IAU described Aguilar as “a Filipino neurosurgeon who has saved over one thousand children in the Philippines by volunteering his time and surgical expertise to treat their congenital malformations and brain tumors.”

“He is also an amateur astronomer and serves as vice president of the Astronomical League of the Philippines,” the bulletin read.

Asteroids are rocky, airless remnants left over from the formation of our solar system about 4.6 billion years ago. According to the National Aeronautics and Space Administration, the current asteroid count is over one million.

“I am really at a loss for words. Not even in my wildest dreams have I imagined having an asteroid named after me,” Aguilar said in a press statement sent to INQUIRER.net on Friday.

“Honestly, I sincerely believe that there is a long list of more deserving Filipino amateur astronomers ahead of me, but I guess there has never been a Filipino, or American, neurosurgeon yet who had received such an honor,” he added.

According to a WGSBN Bulletin dated May 14, 2021, asteroid 7431 Jettaguilar was discovered on March 19, 1993, from the European Southern Observatory in La Silla, Chile, and was initially given the designation 1993 FN41.

Aside from being a neurosurgeon, Aguilar has also been an ardent astrophotographer. His photos of the sun, the transit of Venus, lunar eclipses and other celestial events taken from his private home observatory have been published in spaceweather.com and skyandtelescope.org.

Asteroid Day: Remembering how close they got to obliterating Earth

Read Next
Mama forced to withdraw from upcoming fight with Ligas

TAGS: 7431 Jettaguilar, a Filipino neurosurgeon who has saved over one thousand children in the Philippines, asteroid, asteroid 1993 FN41, Dr. Jose “Jett” Aguilar