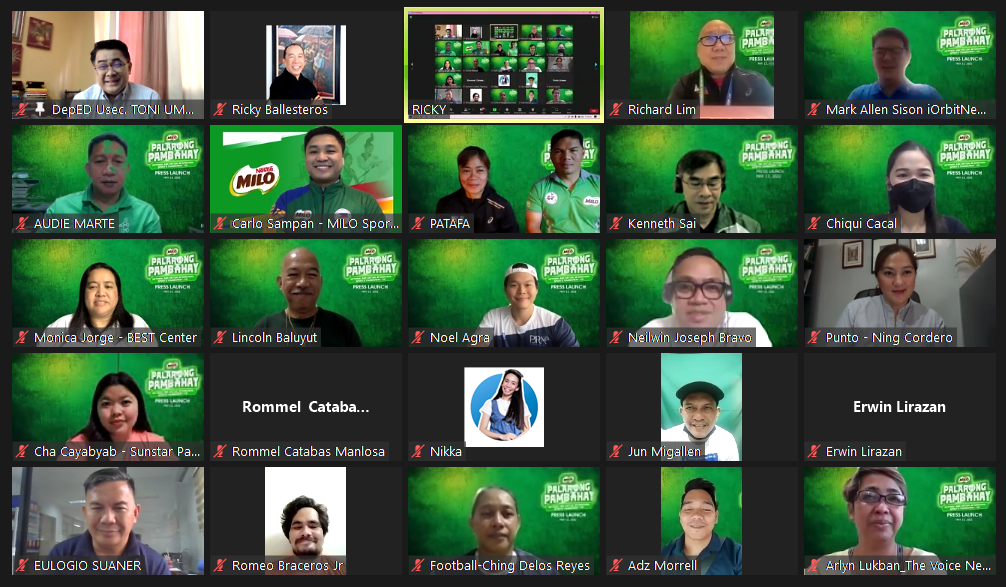 CEBU CITY, Philippines — More than 3,000 student-athletes from all over the Philippines will take part in the virtual Milo-DepEd Palarong Pambahay, the biggest interschool multi-sporting meet, slated from May 21 to 22, 2022.

A total of eight sporting events are featured in the nationwide tournament which follows a virtual platform.

The Milo-DepEd Palarong Pambahay aims to provide a platform for young athletes to compete even in the comfort of their homes.

He added that one of Milo’s goals is to provide student-athletes with the best transition into the hybrid sports competition through the coordination of DepEd, coaches, and tournament directors.

The tournament’s finals will be broadcast live in the official Milo Philippines Facebook page from May 21 to 22. Video submissions of shortlisted participants will serve as their official entries to the competition, where they will be judged and scored in real-time.

“It is our great pleasure to be partnering with MILO once again for the first-ever Milo-DepEd Palarong Pambahay competition,” said Umali.

“Even though the pandemic has hindered most of our on-ground activities, our organization, as well as coaches, teachers, and parents, have worked tremendously hard to make this event a reality. This is quite a milestone and integral proof that nothing can stop the Filipino champion spirit and our winning culture of Bayanihan. We look forward to seeing our athletes shine and excel in the competition.”

The gold medal is equivalent to seven points, while silver is worth five points, and bronze is worth three points.

Sampan added that the Milo-DepEd Palarong Pambahay also serves as their pilot virtual sports event. He promised that they will consider this project in their long-term plans in the future, given its success.

“It is our pilot virtual national event, titingnan natin, we will learn from this how to scale up the event. Titingnan natin ang long term participation and impact on the student-athletes. We will assess the impact that our Palarong Pambahay gave to student-athletes,” said Sampan.      /rcg