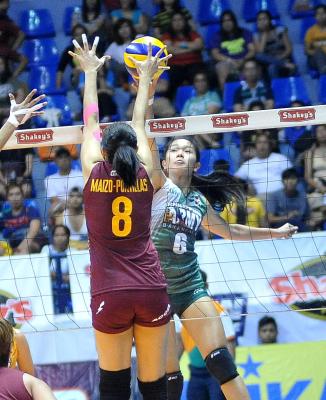 The Cagayan Valley Rising Suns finally got one over the mighty Philippine Army Lady Troopers as they shocked the defending champions in Game 1, 25-23, 20-25, 25-21, 25-18, in the finals series of the women’s division of the the Shakey’s V-League Foreign Reinforced Open Conference.

After falling to the Lady Troopers in the finals during the last tournament and failing to get a win over their vaunted rivals in the elimination round, the Rising Suns rose to the occasion and relied on Thai imports Hyapha Amporn and Patcharee Saengmuang to stem the tide in the fourth set and draw first blood in the best-of-three finals series.

Dindin Santiago was able to suit up for Army and had 18 points while Ging Balse and Jovelyn Gonzaga added 12 and 10, respectively. The loss was Army’s first since August in what has been an incredible run.

Patrick Rojas and Angelo Espiritu had 15 apiece while Rocky Honrada and Chris Macasaet pitched in 14 and 10, respectively. However, they had to scrap for the win as they kept their focus in spite trailing, 9-11 and 13-14 in the fifth and final set.

They capped off the thrilling win by scoring the game’s last three points to edge IEM who was led by Karl dela Calzada’s 20.
Cagayan Valley and Systema guns for the crown in Game 2 on Sunday.

Read Next
Scrabble tourney in honor of Roger Abella this Sunday