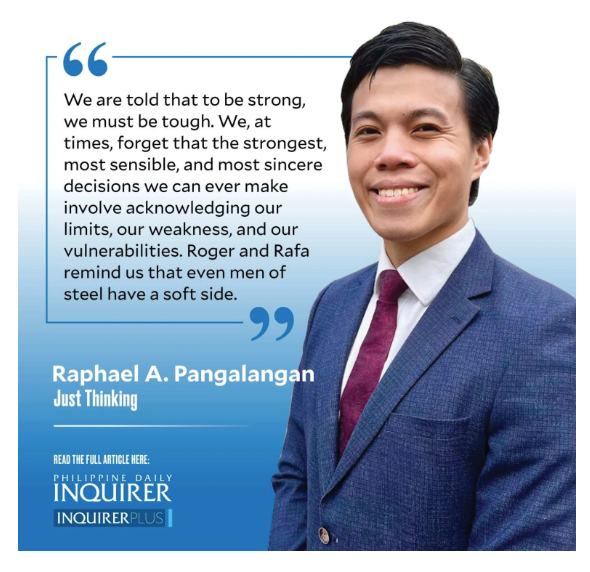 With his grace on the grass, craft on the clay, and handle on the hard court, watching Roger Federer was witnessing an artist at his canvass. The racket was a paintbrush, and every swing was a masterstroke. Roger’s game was artistry in motion. Not only supreme, but elegant.

For over 24 years of his decorated professional career, Roger took us to school. Last Friday, we were given one more session. A celebration turned lesson against toxic masculinity.

Around the world, boys are taught that showing emotion is a sign of weakness, and the Philippines is no exception. In hindsight, I realize that I, too, found myself in the grips of toxic masculinity on more than a single occasion. In a world of “macho men” with nerves of steel, feelings are flawed and tears are taboo.

“Boys don’t cry,” so I’ve heard. Yet in the final moments of this year’s Laver Cup, I saw something else. At the Centre Court of London’s O2 Arena, Roger Federer, Rafael Nadal, Novak Djokovic, and Andy Murray—the Big Three (or Big Four, for all the hardcore Murray fans out there)—could be seen crying. Pictures of Federer and Nadal weeping hand in hand have since gone viral, yet again bringing to life the “Fedal” hashtag for the world to see.

More than just a teardrop or two, this was an outpouring of emotion. Imagine: the most dominant players in the most dominant era in men’s tennis—a dominance so palpable that they are held responsible for creating the “lost generation” of tennis players, that is, a decade’s worth of tennis talent that failed to win a Slam—were, well, “ugly-crying!”

And guess what happened next? The lot of us cried with them! Their teammates and opponents, the crowd around them, and their fans from across the globe who had nothing but love, support, and respect for the now-former professional tennis player shared in this experience and bid farewell to the one and only Federer.

This was sportsmanship at its best. Tears are oft portrayed as signs of weakness, but in the O2 Arena, the tears streamed down their faces in the most powerful way. The raw emotion these athletes displayed told a story of accomplishment, camaraderie, and culmination. It showed the world that even the greatest rivals can be the best of friends, and that one is never too old to cry.

I only recently began following tennis. My wife is the biggest Roger Federer fan, so much so that, in 2019, I was talked into joining her at the Queue at Wimbledon, hoping to catch a glimpse of the Swiss maestro. For those unfamiliar, the Queue is a time-honored tradition where thousands of tennis fans, family, and friends willingly and happily camp overnight in an empty field next to the All England Lawn Tennis Club—the venue for the Wimbledon championships—in the hopes of scoring budget-friendly tickets to show court matches.

It was our first time to ever attempt to watch a professional tennis tournament. While we were unable to get seats to Roger’s quarterfinals match, to our delight, we landed front-row seats to the Rafael Nadal vs. Sam Querrey quarterfinals bout. We left the tournament happy, and I a new #Rafan.

Little did I then know that I was entering a world that offered more than just the sporting moments that leave us in awe, but the lessons that can be kept for a lifetime. Roger will always be known for his flair and finesse, and Rafa for his talent, tact, and tenacity, and they have the accolades to boot. But I wonder whether they ever expected that what may very well be their most celebrated photograph would not involve a racket in hand, but the two hand in hand.

Roger started as a ball boy in Basel, but he leaves his professional tennis career a legend. But more importantly, he leaves a legacy.

We are told that to be strong, we must be tough. We, at times, forget that the strongest, most sensible, and most sincere decisions we can ever make involve acknowledging our limits, our weaknesses, and our vulnerabilities. Roger and Rafa remind us that even men of steel have a soft side.

Times are a-changin’, and with changing times comes a change in perspective. So let us now bid adieu to toxic masculinity. They say that boys will be boys. And boys feel. They fear. They weep. They hold hands.