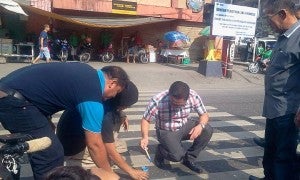 A rainbow-colored pedestrian crossing can be seen at Lopez Jaena Highway in barangay Subangdaku, Mandaue City.

Subangdaku barangay chairman Ernie Manatad said this was conceptualized by their officials based on the suggestion of the “Kaabag sa Kabayotan sa Subangdaku” led by its president Ashlee Cortes, a transgender resident of the barangay.

Mandaue City Mayor Jonas Cortes participated in a ceremonial painting of the “Rainbow Pedestrian Crossing Lane” below the Subangdaku flyover.

“This is in support to the Lesbian, Gay, Bisexual and Transgender (LGBT) group as Mandaue City welcomes everybody. Let us start encouraging good practices in other barangays,” Cortes said.

The project was also supported by  Filipino artist A.G. Saño and local counterparts based in barangay Subangdaku.

Awareness
They are also the people behind the paintings  embellishing the Subangdaku flyover.

The rainbow pedestrian crossing lane is similar to one in Australia, Ashlee Cortes said.

He said the lane would raise awareness on the need to discourage discrimination against their community.

Manatad said barangay Subangdaku has been recognized for its gender equality and solid waste management programs.

He said he hopes other barangays will have their own rainbow pedestrian lanes.

“I look forward to the day when Filipinos will cross the road for LGBT tolerance to complete acceptance,” said Angelo Esperanzate, a human rights and HIV awareness advocate.