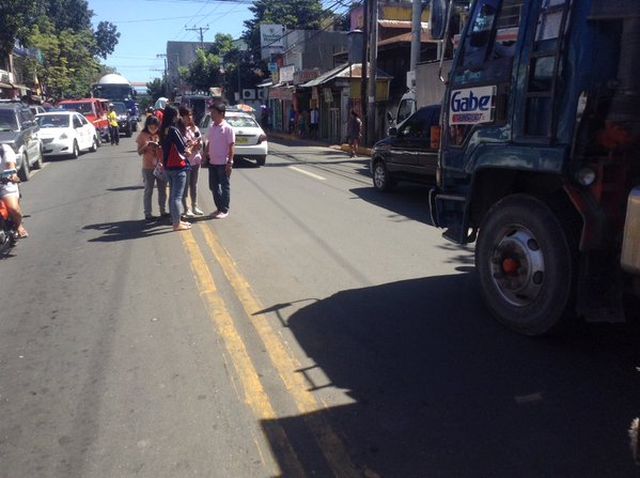 Labangon barangay captain Victor Buendia shows reporters where the divider used to be in the middle of the road. Today only solid traffic lines mark the area.

Malacañang’s 60-day freeze order to be served by DILG

When Cebu City Mayor Michael Rama returns from his Paris trip today, he will face a 60-day preventive suspension he didn’t expect.

The order, signed by the Office of the President, would keep him out of the picture during the Sinulog and the International Eucharistic Congress (IEC) in January, two major events Rama was looking forward to taking a lead role to showcase Cebu.

The suspension, which is not a penalty, stems from an ongoing administrative case against Rama for ordering the demolition of a concrete center island as a traffic hazard in barangay Labangon last year.

Rama was accused of grave abuse of authority and misconduct for destroying a barangay project he had earlier approved.

His allies are expected to howl over the timing and the gravity of the disciplinary action as a political strike to disable Rama as a reelectionist and the Cebu pointman of Vice President Jejomar Binay’s presidential campaign.

Rumors of a suspension for Rama have long been swirling but  the anxiety was over another prominent administrative complaint  — the release of P20,000 calamity aid for City Hall employees and officials in 2013, which auditors said was irregular.  The hearings wrapped up this week.

Rama was due to arrive last night in Manila, and was out of touch for hours.  His secretary said he had lost his mobile phone in Paris.

City Hall officials were caught off guard by reports of the suspension order, whose issuance was confirmed by Cebu Daily News sources in government.

“The mayor didn’t violate anything. He just implemented the law  of the Philippine Highway Act,”said Vice Mayor Edgar Labella, who would have to take over as acting mayor once the order is served by the Department of Interior and Local Government (DILG) regional office.

“The irony is that the mayor is the one charged in a case. The barangay captain was the one who violated the law.”

The preventive suspension echoes the one served in December 2012 against then governor Gwen Garcia in the Capitol for a case  of grave abuse of authority and usurpation filed in 2010 by her estranged vice governor, the late Greg Sanchez Jr.

Her suspension, however, was a penalty after being found guilty  of the administrative charge and lasted six months. She returned to the Capitol shortly before the May 2013 elections was held.

Rama is due back in Cebu today as a special guest for the opening of Robinsons Galleria Cebu  mall, an event he promised to return in time from abroad to attend.

He was in Paris with three councilors to attend the international Climate Change conference.

A certified copy, not just a fax of the suspension order, would have to be served.

Labella said officials are already preparing to file a motion for reconsideration on the decision of Malacañang as well as a petition for review on certiorari with the Court of Appeals.

City Hall lawyers aim to apply for a temporary restraining order to stop the suspension.

“The same office (DILG) that granted his leave and allowed the mayor to travel abroad him until December 11 will implement a preventive suspension order when he was approved for official travel to represent Cebu City in the same period?”  he asked.

Castillo said he didn’t receive any feedback from the Office of the President after filing a motion to dismiss the complaint last July 9.

Buendia said he wasn’t notified about a suspension order nor seen a copy but that the media has been calling him asking for a copy since last week.

(If it’s true that the mayor has been suspended, well, he deserves it. He is not following the law anymore. He just says he’s the mayor)

If the order is out, Buendia said “partial justice” has been served for the people of barangay Labangon after he filed the complaint with the Office of the President in May 2014.

(This case took a long time. It was silent. I thought it won’t be decided. I just tested Pnoy’s “matuwid na daan,” It’s really true after all.)

The mayor ordered the demolition of the barangay-funded project for a concrete road divider and lamp posts near the intersection of Katipunan St. corner Salvador St.

Buendia said the P400,000 project was already 40 percent complete when the city’s demolition team tore it down in March 2014 on orders of the mayor.

He said the project was already bidded out and had permits from City Hall offices, including a Program of Works and Estimates (POWE) signed by the mayor.

It also had approval from the traffic office and Department of Engineering and Public Works (DEPW).

The center island was put up “to prevent prevent vehicles from overtaking lanes”and causing accidents. The streetlamps were to illuminate the streets to prevent crimes.

But Mayor Rama wrote him on Aug. 23, 2013 telling the barangay captain  the concrete barrier was a “traffic hazard per se” and that his office received many complaints about it.

The mayor told Buendia to demolish it.  The barangay captain refused, saying he  couldn’t demolish his own project.

In his complaint, Buendia asked Malacanang to issue a preventive suspension order against mayor Rama considering his “power and influence” over his subordinates and in order to safeguard evidence and prevent witnesses from being threatened and influenced.

Cruz ordered the removal of the center island which was around 28 meters long, saying it posed danger to the traveling public and is a “clear violation” of the policies under the Philippine Highway Act.

The mayor’s lawyers answered the complaint and argued that there was a  presumption of regularity and good faith on Rama’s part.

hey said the mayor  can’t be guilty since it’s his duty to uphold general welfare and the road divider construction violated the Civil Code, Philippine Highway Act, and City Ordinance No. 1481.