THE GlobalPort Batang Pier survived an endgame scare by the Meralco Bolts and escaped with a 108-104 win last night in the 41st PBA Philippine Cup at Cuneta Astrodome.

GlobalPort lost a 24-point third quarter lead but found a way to escape with crucial hits in the dying seconds. 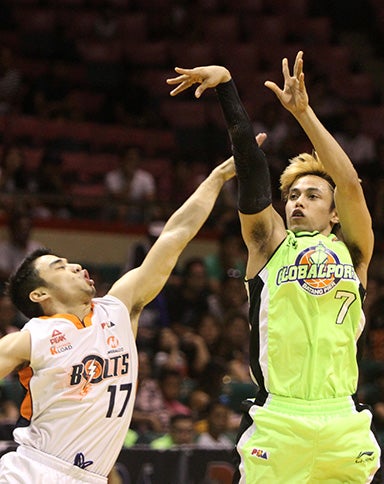 The Batang Pier pocketed their third straight win and sixth overall in nine games, moving up to fourth place that boosted their chances of earning a twice-to-beat advantage in the first phase of the quarterfinal round.

Meralco tasted its fourth straight defeat as it bowed out of playoff contention after dropping to 1-9 (win-loss).

The Bolts showed tremendous fighting spirit in the loss as they completed a major fightback that saw them taking a 96-94 lead after trailing by 24 points in the third.

GlobalPort regrouped with Doug Kramer completing a three-point play and Stanley Pringle and Terrence Romeo each hitting a triple, giving their team a 103-96 lead.

Romeo led the way for GlobalPort with 33 points, while Pringle and Jay Washington added 19 and 15, respectively.

Jimmy Alapag had his best game in a Meralco uniform after finishing with 18 points.