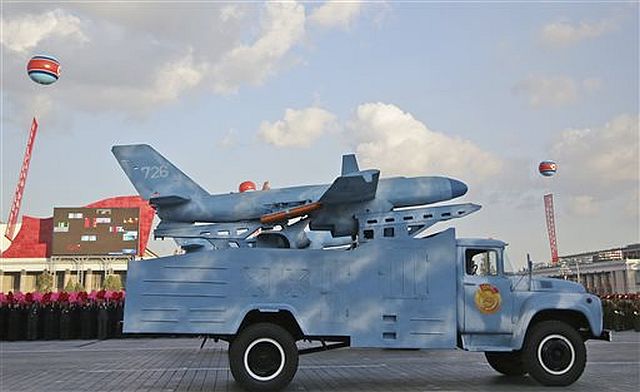 A drone is paraded in Pyongyang, North Korea in this Oct. 10, 2015 file photo. North Korea has in recent years touted its drone program, a relatively new addition to its arsenal. South Korea on Wednesday fired warning shots after an unknown object from North Korea was seen flying close to the rivals’ border. (AP PHOTO)

It is the first time shots have been fired in what has so far been a Cold War–style standoff between the Koreas in the wake of the North’s nuclear test one week ago.

The North Korean drone was flying dozens of meters (yards) south of the border and turned back to the North after the South fired, South Korean defense and military officials said, requesting anonymity because of office rules. The shots didn’t hit the drone.

North Korean drone’s flights across the world’s most heavily armed border are rare but have happened before.

In 2014, Seoul officials discovered what they called several North Korean drones that had flown across the border. Those drones were crude and decidedly low-tech, but they were still considered a potential new security threat.

Animosity is high after the nuclear test, the North’s fourth.

Since Friday, South Korea has been blasting anti-Pyongyang propaganda and K-pop songs from huge speakers along the border. The North, which calls the broadcasts an act of war meant to threaten its system of government, is using speakers of its own in an attempt to keep its soldiers from hearing the South Korean messages.

Seoul also said that North Korea had flown leaflets across the border, describing President Park Geun-hye and her government as “mad dogs.”

Read Next
8 camps may be used by US troops