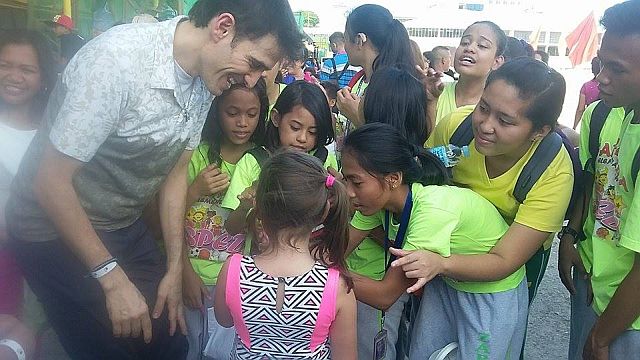 Close to 5, 000 kids, who were rehearsing for their first communion at the Cebu City Sports Center (CCSC) on Saturday, broke into cheers and applause when they saw their visitors.

Some of kids and their parents talked to Tagle and the Ponce family.

Others even had photos with them. Ma. Corazon Talay, first communion coordinator, said children from the different archdioceses in the country are now in Cebu for Saturday’s first communion, one of the activities of the ongoing International Eucharistic Congress (IEC).

She said that as of noon on Friday about 4,800 kids have already pre-registered for the event scheduled at 4 p.m. on Saturday.

The children were having their lunch break when Cardinal Tagle arrived about noon.

Standing on the sports center’s rubberized track, Tagle addressed the children and their parents who were having their lunch at the bleachers. He wished them well for their first communion.

Some children went down and kissed Tagle’s hand.

The cardinal stayed at the CCSC for about five minutes.

After Tagle left, members of the Ponce family arrived at the sports center.

Standing on the rubberized track, Paul showed his juggling skills that delighted the children.

He later introduced himself and later called other members of his family.

After the introductions were made, the entire family performed for at least 10 minutes.

Pablo, the eldest of the Ponce siblings, later shook hands with the children and spoke with some of the first communicants.

One child asked Pablo how he learned to juggle.

Pablo replied: “In Jesus everything is possible.”

The children gave a resounding “yes.”

The Argentinian jugglers left after 30 minutes to allow the children to resume with their rehearsals.