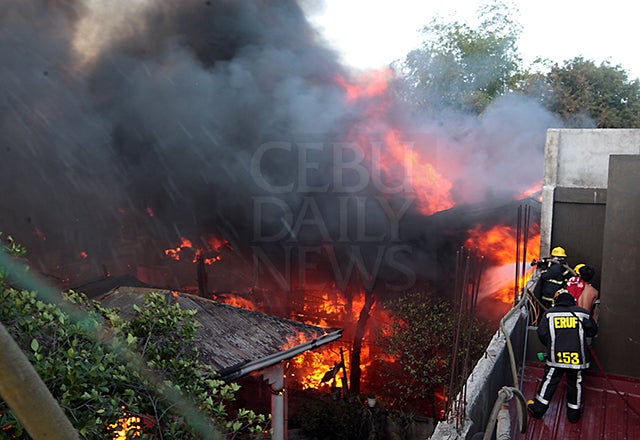 Over 70 houses destroyed in 2 fire incidents in one day

When the smoke cleared, the body of a six-year-old girl was found among the charred debris at the fire site in Purok Nangka, Barangay Ibabao-Estancia, Mandaue City yesterday afternoon.

Fire ripped through the urban poor community for about an hour yesterday afternoon, destroying some 55 houses.

Jessa Mae Bucar, 6, was initially reported as missing by parents Jesus Bucar, 27, and Madel Remedio, 26. Their two other children, James Remedio, 8 and Jemar Bucar, 4, are safe.

The fire was tapped at 2:10 p.m. and placed under control at 3:15 p.m., after fire fighters raised the response level to Task Force Alpha.

Since the start of the year, a total of 13 fire incidents have hit Metro Cebu.

Mandaue City Fire Marshall Joel Abarquez said they had difficulty penetrating the area, which is in the interior portion of the barangay.

The fire originated at the second floor of the house owned by Visitacion Lucernas in Purok Nangka and spread to Barangay Guizo, where five houses were damaged.

Lucernas was brought to a hospital after she complained of having difficulty breathing.

Her son Jonathan, who works as staff of Barangay Ibabao-Estancia Barangay Hall, said his mother has a heart ailment.

Jonathan said they had no idea what caused the fire. Investigation is ongoing.

Jesus Bucar, whose daughter perished, said he and wife Madel were at work nearby, slaughtering chickens for a supplier,  when the fire broke out.

Jesus said he ran home and instructed all his three children to run for safety while he was going to help put out the fire. When he returned, he found their house razed to the ground, his wife was hysterical and daughter Jessa Mae was missing.

Another resident, Narcisa Arsenal, was also reported as missing. She was found safe.

The affected families were housed at the barangay multi-purpose gym. Barangay Captain Jun del Mar said they were going to pitch tents at a vacant lot to accommodate some of the fire victims.

He doubted whether the victims would be able to rebuild.

“Ibaligya naman gud ni sa tag-iya ang ilang yuta, gitagalan naman lang gani ni sila diri hangtud sa Mayo (The owner is selling the lot. The dwellers had been given only until May to vacate the area),” he said.

Sixth district Rep. Luigi Quisumbing, who went to the fire site, facilitated the distribution through the barangay of food, kitchen utensils, blankets, clothes and other basic needs.

“We will also provide assistance to the Bucar family who lost their child in the fire,” said Quisumbing.

The Lapu-Lapu City Fire Central District received the alarm at 12:10 a.m. and declared it under control after 9 minutes.

Investigator FO1 Rowel Brañanola said the fire started at the house of Gigi Estrera, who said an electric fan sparked and caused the fire.

Six of the 17 affected houses were partially burned. No one was reported hurt.

The fire victims were provided tents for temporary shelter. Most of them own the property so they will be able to rebuild.