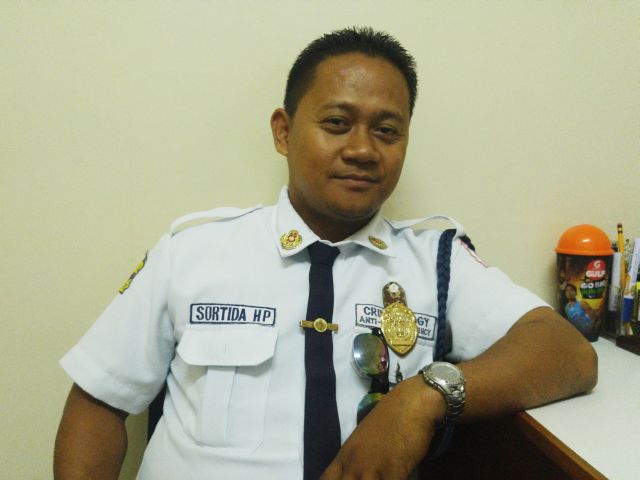 FOR six days a week, security guard Heremias Sortida stations himself at the University of Cebu–Maritime Education Training Center (UC-METC), usually at the crack of dawn.

He starts his 12-hour shift by greeting students with a stern look, checking to see if they have the prescribed haircut and uniform requirements.

About 17 years into the job, “Chief Sortida” earned a new title as the “singing security guard” when a two-minute video of him singing was uploaded on Facebook.

In the video, the 39-year-old Sortida was shown singing songs performed by ’80s crooner Bing Rodrigo in his calm baritone voice.

The video was seen by 30,000 people, most of whom praised Sortida’s rendition of Rodrigo’s song “Sinayang Mo.”

“Wala ko nag-expect nga daghan kog mapalipay sa akong pagkanta, ug wala ko nagdahom nga daghan makakita, maganahan (I did not expect that I would make a lot of people happy with my singing, and I didn’t know that a lot of people would see and like it),” Sortida told Cebu Daily News.

Sortida, a Zamboanga Sibugay native, counts singing as a favorite past time.

He spends four hours on the road every day, singing while driving his motorcycle to and from the university. Sortida said singing helps him forget his fatigue.

Unfortunately for him, singing also cost him an education.

Previously an engineering student in the University of Cebu, Sortida spent his nights singing karaoke and hanging out with his friends.

He neglected his studies and dropped out, getting a job as a security guard.

Soon, he got married and any dreams of finishing college was forgotten.

Sortida said he has regrets and he wants to make sure his kids finish college.

While blessed with a good singing voice, Sortida shied away from singing contests and preferred the intimacy of singing karaoke with his friends.

They agree that Sortida should share his talent with the world even through social media.

“His voice is very unique, and this is one factor why the post went viral. And we think he deserves all the attention he can get so we take videos of him singing and post it online,” Dr. Mark Abadiano said.

While grateful for his social media fame, Sortida said he knows it will soon pass.

Still, Sortida said he will dedicate every single song he is asked to sing to his University of Cebu family, his friends, his wife and children and to God who gave him this gift of music.

“For now, I look forward to the next I.D. I will confiscate from the students,” he said with a knowing smile.

Read Next
‘Learn beyond the classroom’