DRUG TEST FOR ALL 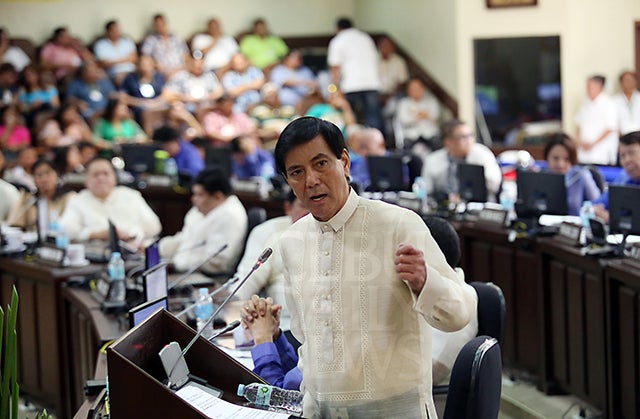 “I’ve done it once or twice and I don’t see any problem in taking the drug test again.” – Mayor Michael Rama. (CDN PHOTO/JUNJIE MENDOZA)

With the elections barely three months away,  the Cebu City Office on Substance Abuse and Prevention (Cosap) has issued a challenge to candidates of all elective posts in the city: take a drug test.

Dr. Alice Utlang, Cosap’s chairperson, yesterday said candidates in the city should undergo  drug testing before they present themselves to the Cebuanos.

“Anyone who is gunning for a position in government should be clean of illegal drugs,”  said Utlang.

Anyone found positive of drug use, she said, “is not fit for any position in government.”

Utlang said submitting to a drug test is also a sign of honesty and willingness to serve the people of Cebu.

Candidates from the opposing camps of Bando Osmeña-Pundok Kauswagan (BO-PK) and Team Rama, when asked for reaction by Cebu Daily News, all said they have no problem with undergoing a drug test, including Cebu City Mayor Michael Rama, who is seeking reelection in May.

Rama, reached by phone last night,  was initially irritated when asked how he would react to the challenge posed by Utlang, in the light of persistent allegations that he is a drug user.

Later on, however, the mayor said that since he had previously gone through drug tests, he would be willing to go through it once more.

“I have done it once or twice and I don’t see any problem in taking the drug test again,” Rama said.

Rama was particularly sensitive  to the issue as he has been previously accused of alleged drug use by his erstwhile political mentor-turned-nemesis, former Cebu City mayor Tomas Osmeña, who is gunning to take away the mayoral seat from Rama.

“I welcome it because I think all candidates should undergo some kind of testing to erase any doubts in everybody’s mind about each candidate. This is especially needed because many candidates are unfairly branded by their opponents as addicts,” he told CDN.

Incumbent North District Rep.  Raul Del Mar, who is seeking reelection under BO-PK,  also said he has no problem with the drug test and will submit to it “anytime.”

Councilor Gerardo Carillo,  who is running for the south district congressional seat under Team Rama, also did not see any problem with a drug test.

“For that matter, candidates should submit themselves to drugs testing in a random and unscheduled manner witnessed by media and results announced right then and there,” Abellanosa said.

Incumbent city councilors, from both majority and minority blocs who are running for reelection, also gave similar nods of approval to Cosap’s plan — a consensus not usually seen inside the session hall where they extensively debated over issues.

Councilors Dave Tumulak, Hanz Abella and Noel Wenceslao,   all Team Rama allies, said they agreed with the plan so people would know.

“I am amenable to the drug testing. We owe this to the public that we should serve the people free from any use of the prohibited drugs. I will submit myself for drug testing anytime,” Abella said.

Wenceslao said anyone, by right, could refuse a drug test but he said it would be better for candidates to go through it so as not to leave doubt in the public’s mind about their fitness to hold office.

Councilors allied with BO-PK  were also amenable to the drug test.

Councilor Alvin Dizon also said he was willing to take the test immediately, pointing out that in 2014,  he sponsored a resolution asking all elected city officials to undergo drug testing.

Utlang said the candidates have no reason to reject the challenge.

“If they want to serve the public, they should be negative of any drug use. Who wants a drug addict serving the people of Cebu?” said Utlang.

She said a candidate who wished to be tested  would only need to write Cosap a letter expressing a desire to be tested.  Cosap would then schedule a surprise drug test for the candidate, she added.

She explained that Cosap would not want the candidates themselves to  set the date for their testing  to ensure accuracy of the test’s result.

“A drug test should always be a surprise,” she stressed.

She said the Commission on Elections (Comelec) could initiate the drug tests, particularly for candidates who are not reelectionists.

Cebu City Elections Officer Marcheal Sarno supported Utlang’s challenge but stressed that candidates are not required by law to undergo a drug test.

Sarno recalled that in 2004,  national and local candidates were mandated by Comelec to submit to mandatory drug testing but this requirement was scrapped in 2010.

Utlang said drug use should not be overlooked, particularly for those in government service.

In City Hall, she said, six  employees tested positive for drug use in a Cosap-initiated drug testing held from Jan. to Feb. 12, out of the 254 employees and department heads who underwent the random drug test.

Read Next
Gendrauli to spearhead F2 Logistics in PSL