This photo the convent of the Order of the Carmelites in Barangay Mabolo, Cebu City is a treasured possession of the Carmelite nuns. A section on the second floor was marked “x” to indicate where Cory Aquino stayed and hid on Feb. 22, 1986, the day the EDSA People Power Revolution broke out. (CONTRIBUTED PHOTO/ ORDER OF THE CARMELITES)

In the face of uncertainty, a monastery in Cebu City sheltered a woman in danger from her government.

She hid behind the cloistered walls of the Carmelite Monastery in Barangay Mabolo for just 14 hours. But it was enough for Cory Aquino to survive the night from the prying eyes of a dictatorship’s military.

After three decades, the Carmelite nuns recall with fondness the time when they opened their door to Cory.

“We need to keep the memory alive. We need to keep on telling the story just like how the Hebrews relive the story of redemption. By paying attention to history, we learn lessons,” says 87-year-old Mother Mary Aimee Ataviado, who was Mother Superior when Cory spent a night in the monastery in 1986.

Except for their regular Mass and prayer schedules, the nuns have no special activity for the 30th anniversary of Cory’s overnight stay at the monastery as well as the

But the twin events will always have an indelible mark in the history of the Order of the Carmelites in Cebu.

“It was my birthday. The nuns were washing the dishes after dinner when Nancy called me up and asked if she could bring Cory because she was in danger,” she says.

Cory and her running mate Salvador “Doy” Laurel were in Cebu to launch a civil disobedience campaign against Marcos at Fuente Osmeña rotunda. With them were

On that day, Defense Minister Juan Ponce Enrile and the Philippine constabulary’s Deputy Chief of Staff Fidel Ramos had just withdrawn their support from

President Ferdinand Marcos and were holed up in Camp Aguinaldo, the Armed Forces’ headquarters.

In Manila, thousands of Filipinos began to gather along Epifanio de los Santos Ave. (Edsa) and Boni Serrano Ave., between Camps Aguinaldo and Crame (police headquarters), protecting the mutinous soldiers and policemen and calling for Marcos to step down.

In Cebu, to trick military agents tailing Cory, a convoy of vehicles with Cory supposedly in one of them made its way to the Cebu Airport on Mactan Island. Cory was actually being driven to the monastery by Nancy’s husband, Antonio, one of Cebu’s leading opposition figures.

Ataviado reveals it took a while before Cory got to the monastery because they had to look for Kris who went missing. After a frantic search, they found that Kris went shopping with friends. 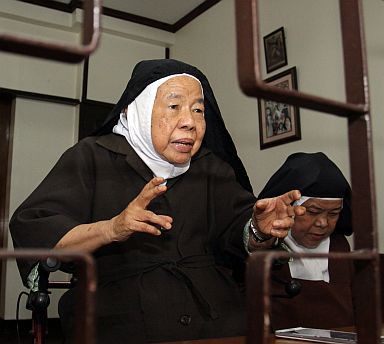 Mother Mary Aimee Ataviado, 87, then Mother Superior of the Order of the Carmelites in Cebu, recalls the day Cory Aquino sought refuge in their convent on Feb. 22, 1986. With her is Sr. Melanie Costillas, 63. (CDN PHOTO/LITO TECSON)

Cory and her group arrived at the convent past 9 p.m., with the car’s lights turned off to avoid detection. The car also went through the compound’s smaller gate meant for supply delivery vans.

Once inside, Ataviado recalls Cory exclaiming, “Oh, it’s like the Sound of Music,” alluding to that part of the 1965 musical film when the Von Trapp family were escaping from their homeland Austria to avoid military persecution.

“And then she asked us, ‘Is it safe here?’ Out of the blue, I answered, ‘They have to kill us first before they can reach you.’ Because of that, she felt safe,” says the nun.

The Carmelite Monastery, being home to contemplative nuns under “Papal enclosure,” is off limits to outsiders. Only heads of states are exempted from such rule.

Marcos, who had held power over the country for 20 years, had just been declared the winner of the snap elections against Cory Aquino, the widow of assassinated Senator Benigno “Ninoy” Aquino.

In the eyes of many Filipinos, Cory won the snap polls marred by widespread cheating, violence, and voters’ disenfranchisement.

“Nobody is supposed to enter the monastery, but we allowed Cory in because we really believed she won in the elections, and so she was the rightful head of state at that point in time,” says Ataviado. “We let her in with a clear conscience that we didn’t violate any Church rules. For us, she was the head of state.”

Cory and Kris were to occupy the most comfortable room located at the monastery’s second floor, but since it had two big windows and a terrace, Cory didn’t feel safe there. She chose a smaller room where she and Kris slept among religious images and office supplies.

The nuns stayed up all night and prayed. Cory was also seen praying the Holy Rosary past 11 p.m.

Sometime around 2 a.m., Ataviado says they heard loud banging at the convent’s iron gate. “We were all very scared. I was trembling, thinking that the soldiers of Marcos had arrived,” Ataviado says.

The nuns began planning how to hide Cory and Kris, including making them wear their habit,  pretending to be nuns. Some suggested to hide them in the ceiling above the choir loft.

Ataviado says they decided to ignore the banging on their gate, even as they cowered inside in fear. After about 30 minutes, the noise outside stopped. The next day, they learned that the persons who banged the gates were Cory’s supporters who wanted to join them inside. They were Ramon Mitra Jr., who later became the

Speaker of the House of Representatives; John Osmeña, who went on to become a senator and is now Mayor of Toledo City; and Aquilino Pimentel Jr., who later headed the Department of Interior and Local Government and was elected senator.

That same morning, Ataviado reveals Cory received at the convent several important guests, among them then-United States Consul Blaire Porter, who came to assure that the US was willing to protect her in going back to Manila.

“The consul even offered a submarine so Cory could go back to Manila,” according to Ataviado.

It was also at the monastery where Cory, on the urging of her supporters, wrote the speech that she delivered when she arrived in Manila, asking Marcos to step down.

Amid it all, Cory remained calm, entrusting everything to God.

“She was very prayerful, a woman of God,” Ataviado says.

By then, Cory had been inaugurated President of the nation, having been sworn into office in the morning of Feb. 25 by Supreme Court Associate Justice Claudio Teehankee in a simple ceremony at Club Filipino.

Cory, now President, returned to the convent in 1992 shortly before her term ended. She came back two more times, the last in 1996, says Ataviado.

As the country marks the 30th anniversary of the Edsa People Power Revolution, Ataviado has these words to Filipinos:
“(If we look at our history), God is really taking care of us. Let us continue to learn from the events of life and do our best to do God’s will because the progress of the nation and the salvation of our souls depend on it.

“We can say that God really has a mission for the Philippines. There is no end to problems, but we have to keep on working (for the good of our country).”