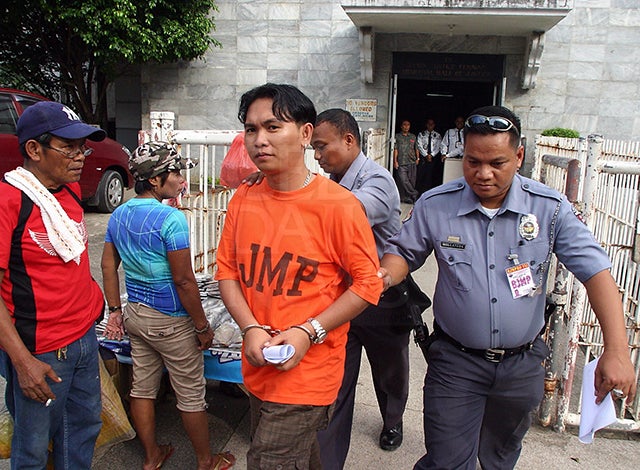 This photo was taken on June 28, 2009 when Joavan Fernandez was about to be released from jail after Cebu City RTC Judge Manuel Patalinghud granted him bail. (CDN FILE PHOTO)

A Cebu City Regional Trial Court judge yesterday found him and five of his friends guilty of abducting and mauling two vulcanizing shop workers in 2008 whom he suspected to have stolen the spare tire of the car of his father, then-Talisay City Mayor Socrates “Soc” Fernandez.

Except for two accused who were still minors when the offense was committed, Joavan and the rest will have to stay behind bars for at least 21 to 36 years.

Joavan, now 31, will be in his 60s by the time he gets out of jail if he loses in an appeal he intends to file on his verdict.

The 36 years sum up the two jail terms imposed by Judge Ester Veloso of RTC Branch 6 based on their twin convictions for slight illegal detention.

The six accused were also ordered by Veloso to pay P100,000 in moral damages to each of the two victims, and P50,000 in exemplary damages to one of the victims.

Joavan, the adopted son of Talisay City Councilor Socrates Fernandez, has been detained at the Cebu Provincial Detention and Rehabilitation Center for nearly three years in relation to another case for illegal possession of explosives, a non-bailable offense.

Of the six accused, only Joavan and Teodoro Ligaray were present when the case was promulgated yesterday morning.

The other accused — Benedeck Gabasa, Mark Perez, Leoniver Singson, and Roland Perez — lose their right to appeal the decision due to their failure to appear in court.

Singson and Roland Perez, however, will not serve jail terms as they were minors when the crime happened, said Veloso.

Joavan expressed dismay over the decision of the court.

“Surambaw. Pero wala ko’y mahimo. Og wala pa manawag ug nangayo og tabang si Papa aron mauli ang ligid, di gyud unta ni mahitabo. (The decision is not fair. But there’s nothing I can do. If only Papa did not ask me to look for his spare tire, this case would not have happened),” he told Cebu Daily News.

Joavan said he will definitely petition the Court of Appeals to review the twin rulings of the RTC.

Joavan and the other accused were sentenced to a jail term of nine to 16 years in one case, and an imprisonment of 12 to 20 years in the other case.

According to Prosecutor Llena Ipong-Avila, the resident prosecutor of RTC Branch 6 in Cebu City, the two jail terms shall be implemented “one after another” since they involved two separate cases.

Joavan and his five friends were charged for abducting and mauling vulcanizing shop workers Winston Abellana and his cousin Osbert Abellana on Aug. 11, 2008.

Winston, 18, and Osbert, 21, were allegedly forced into a vehicle and were brought to Joavan’s house in Plainville Subdivision in Barangay Bulacao, Talisay City where they were mauled.

They were later rescued by the police who were guided by Osbert’s father, Oscar.

When the incident happened, Joavan’s father was the mayor of Talisay City.

In her decision, Judge Veloso said the prosecution had presented sufficient evidence to prove the guilt of all the accused.

“The prosecution has proven that the acts of the accused convincingly demonstrated the deprivation of the liberty of the victims,” she said in her 15-page decision.

Veloso, the third judge to handle the case, said it was also established that the six accused conspired in detaining and mauling the victims.

Police had then arrested Joavan’s five companions. But Joavan eluded arrest. He was arrested by agents of the National Bureau of Investigation in Central Visayas on Oct. 7, 2008 inside a spa in Talisay City after the court issued an arrest warrant against him.

Winston later withdrew his case against Joavan and his companions, claiming he did not see who mauled him because it was dark at that time.

But the case continued based on the testimonies of Osbert and his father Oscar.

In January 2009, the court released Fernandez’s two minor companions to the custody of their parents pursuant to the Juvenile Justice and Welfare Act of 2006.

In June 2009, RTC Judge Manuel Patalinghug, the first to hear the case, allowed Joavan and other accused to post bail, even if serious illegal detention is a non-bailable offense, as the evidences against them were “inherently weak and devoid of any factual bases.”

Prosecution lawyers asked Patalinghug to inhibit himself, saying the judge might have prejudged the outcome of the cases.

The case was raffled to Judge Olegario Sarmiento who also let go of the case. It was then assigned to Veloso.

Joavan, in court testimonies, denied he harmed the two victims.

He insisted he only meant to bring Osbert to the police station for an investigation but Osbert ran away.

Joavan said his friends who went in search of Osbert later saw him being mauled by people for allegedly entering someone else’s house.

But Veloso did not give credence to Joavan’s defense.

“Their asseverations that the offensed parties were thieves do not explain why no charges for theft were filed against them,” she said.

“On the face of the evidence adduced by the prosecution, the testimonies of the defense witnesses deserve scant consideration,” she added.

Read Next
Joavan and his brushes with the law