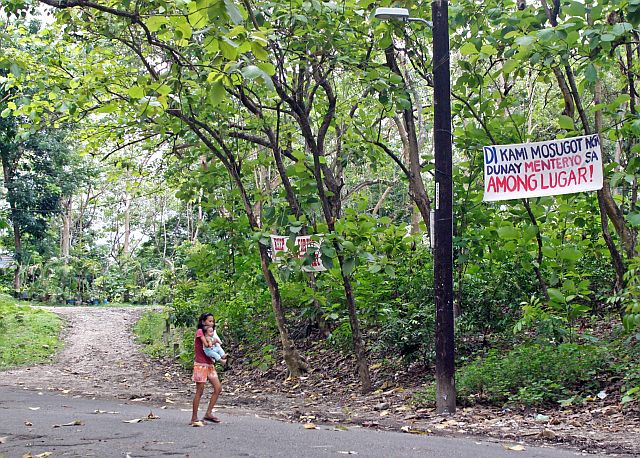 A girl carrying her baby passes by the signages put up by residents of Barangay Kalunasan who opposed plans to build a cemetery at the Osmeña Shrine in this 2011 file photo.

Who told settlers of Barangay Kalunasan that the 4.2-hectare Osmeña Shrine will be divided and distributed to them?

That’s what Cebu City Hall wanted to find out as it refuted reports yesterday that the 4.2-hectare Osmeña Shrine area in Barangay Kalunasan will be distributed to some residents there.

Collin Rosell, Division for the Welfare of the Urban Poor (DWUP) chief, said he talked to one of the settlers who tried to fence a portion of the shrine with straws so he can build a house for his family.

“What I know is that lot no. 1412 which measures 42,000 square meters and hosts the Barangay Kalunasan nursery and Osmeña Shrine is a city government-owned property. But there are residents trying to cordon the area and dividing it among themselves,” Rosell said.

Rosell said he reminded the settlers that the 4.2-hectare area is a protected area and houses should not be built there.

He said the city government won’t issue occupancy permits to these settlers.

Kalunasan barangay chairman Nunilon Monares said they already removed the straw set up by the settlers after receiving reports of the area being “fenced” yesterday.

“The barangay is firmly against building any houses in the area because it is a protected area for forests and it houses a butterfly sanctuary,” Monares said.

Monares said he ordered barangay tanods to patrol the area to make sure that the settlers won’t fence the site again.

Rosell said one of the residents told him that the Old Philippine Railways Association (OPRA) gave them the go signal to claim portion of the area.

He also said others claimed that it was former Mayor Tomas Osmeña and former barangay Kalunasan chairman Francisco Pintor who told them to claim the lot.

Osmeña denied giving them permission, saying he knows the lot is city-owned.

“That’s not tru. How can I tell them that they can claim the lot? They asked me if we are going to make it as a cemetery. I said if you don’t like the idea, I won’t. But it doesn’t mean that I let them claim the lot,” he said.

Osmeña referred to his 2011 proposal to build an interfaith cemetery in the lot located near Beverly Hills subdivision. It was opposed by homeowners there for fear that it may contaminate the water wells.