Road closure near UP Cebu eyed for debates 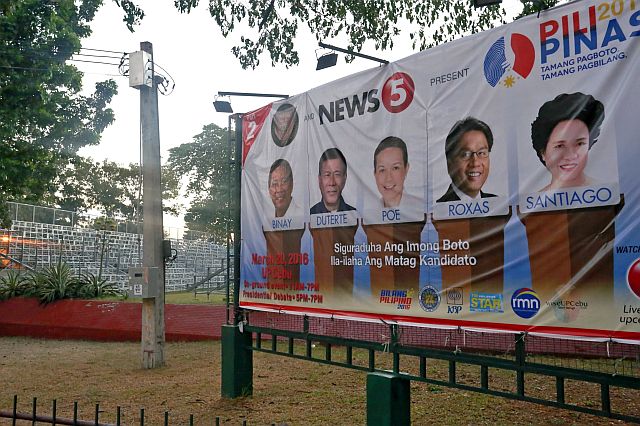 A large billboard with the five presidentiables is displayed in front of the University of the Philippines Cebu campus. (Right) The bleachers for those attending the debate inside the campus. (CDN PHOTO/JUNJIE MENDOZA)

ORGANIZERS of the Visayas leg of the presidential debate at the University of the Philippines (UP) Cebu campus, who are in midst of preparations for the March 20 event, are considering the closure of a portion of Gorordo Ave. fronting the UP Cebu campus to vehicular traffic.

Gregg Lloren, UP Cebu professor, said yesterday they will request the Cebu City Transportation Office (CCTO) to close the road starting from C. Rosal St. near Harolds Hotel until the portion near the Lahug Elementary School.

This is to ensure the security of the five presidentiables   as well as the people witnessing the debate, who had been  screened beforehand,  Lloren said.

The five presidentiables, who attended the Mindanao leg of the debates last month are also expected to attend this round of the debates. They are Vice President Jejomar Binay of United Nationalist Alliance (UNA), former mayor Rodrigo Duterte of the The Partido Demokratiko Pilipino-Lakas ng Bayan (PDP-Laban), Grace Poe of the Nationalist Party (NP), Mar Roxas of the Liberal Party (LP) and Miriam Defensor Santiago of the People’s Reform Party (PRP).

“It’s a national event, and I think this will be the biggest in the history of UP Cebu. Security will be very, very tight,” Lloren told Cebu Daily News.

The Cebu City Police Office, Police Regional Office 7, Armed Forces of the Philippines and supplementary security guards will help ensure proper security protocol during the event. K9 units will also be around.

Only 500 pre-invited guests will be allowed inside the UP Cebu Performing Arts Hall where the debate will take place.

Lloren said these are predetermined by the Commission on Elections (Comelec) and TV5.

However, around 1,500 people will be allowed inside the campus where bleachers, lent by the Lapu-Lapu City government, are currently being assembled for a livestreaming there.

More than 600 of the passes will be given to 22 schools in the city which will be allowed to send 30 representatives each, Lloren said.

Lloren said others who may not belong to any of the invited groups can still get a chance to get passes by answering trivia questions on their Facebook Page “Wise UP Cebu 2016,” where 70 passes will be given away.