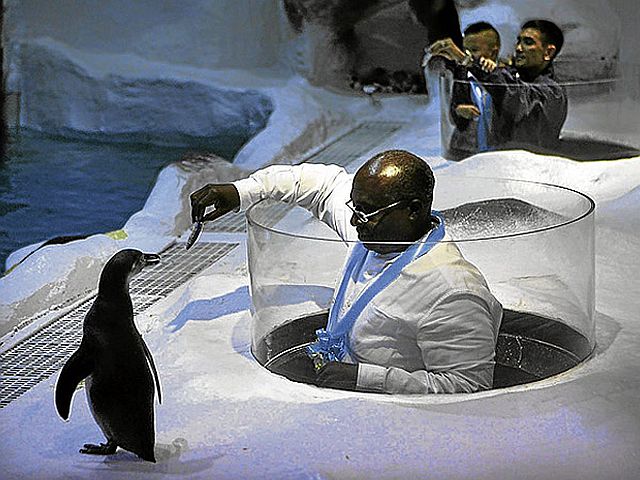 Former US Ambassador to the Philippines Harry Thomas feeds fish to a penguin at the Manila Ocean Park in this Nov. 11, 2011. (INQUIRER FILE PHOTO)

Work on the Cebu Ocean Park at the South Road Properties (SRP) has barely started but an online petition opposing the project has already drawn more than 1,000 signatures.

Joan Clarice Caccam, a senior digital business manager for a digital marketing agency in Quezon City, said she got worked up when she read about the project.

“As a concerned citizen, I saw the news posted at the Marine Wildlife Watch of the Philippines and felt strongly about the issue. I felt that it was not right that wildlife be put in captivity for entertainment purposes, and to make profit out of this form of abuse. I saw the comments and I felt that so many people feel the same way, and that I was not alone,” she told Cebu Daily News.

In order to get the message across, Caccam started an online petition at ipetitions.com last March 11.

As of yesterday afternoon, there were already 1,436 signatures for the campaign, surpassing its original goal of 1,000 signatures.

There were also 438 comments left by some of the users.

Though most of the signatures come from users in the Philippines, there are also signatures from people in the US, Hong Kong and even Peru.

One doesn’t have to be geographically near the construction site in order to get concerned with the project, Caccam said.

“Being concerned about issues that are not just in Manila, or even just in the Philippines is a sign of greater awareness,” she said.
SRP Manager Roberto “Bu” Varquez earlier announced that construction of Cebu Ocean Park already started last month.

The contractor is pile driving for the one-hectare facility which is expected to be finished by October next year.

Aside from an oceanarium, the facility will have a jungle trek and an amphitheater where they can hold dolphin and sea lion shows.

However, Cebu Ocean Park Vice President for Sales and Marketing Armi Cortes clarified that there will be no whales or dolphins in the facility.

In a phone interview, she said the Cebu Ocean Park is also intended for educational purposes.

“We respect their views. There are different schools of thought when it comes to marine life conservation. Not everybody can go diving for underwater appreciation.

A lot of students and children have benefited from the Manila Ocean Park,” she said.

“It’s important for children to have an actual experience with underwater life for them to have a stronger appreciation for it. When you see and experience nature, you fall in love with it and you help protect it,” Cortes said.

In their nine years of operation in Manila, Cortes also said they’ve seen how their activities like encounters with the wildlife have helped children whose parents have told them positive reviews about their programs.

Cortes said the ocean park also has a breeding center for marine animals which is “significant proof” that they take good care of their animals.

Jom Acebes of Balyena.org said they are working with other groups and concerned individuals to further the campaign against the Cebu Ocean Park.

Caccam said what she wants most from starting the petition is to increase the awareness among people on how our wildlife should be treated.

“They have value in our ecosystem being where they should be – in the wild – not in ocean parks. We can admire them from the wild, and have reverence for our environment by protecting them,” she said.

Cebu City Mayor Michael Rama said he still has to be personally briefed about the project.

He said though that there isn’t much the city can do since the project is between SM, who owns the lot where the Ocean Park will stand, and the operator of the facility.

“When you already have a property being sold, whatever is done, as long as it’s not illegal, the city government will just be hoping and earnestly praying that conversion of the areas will be for economic, social, cultural and intellectual outcome,” Rama said.

He said though that if the ocean park had been done somewhere else, there should be no reason why it can’t be done in Cebu as long as proper care is observed.