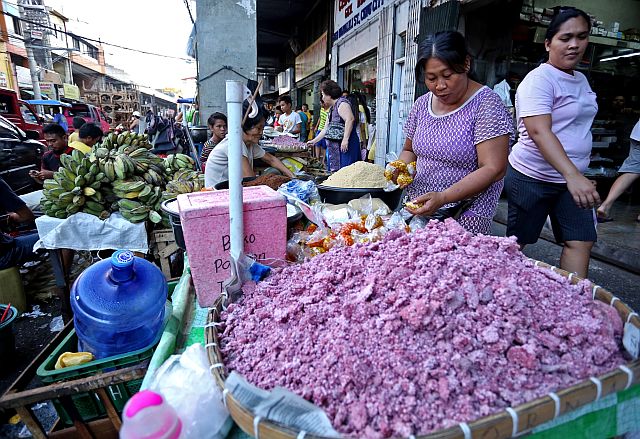 A vendor at Carbon market arranges her binignit ingredients for the meal that Cebuanos prepare on Good Friday. (CDN PHOTO/LITO TECSON)

For street vendor Nang Piling, what she sells is not just a simple sweetened stew that you eat on a hot afternoon. Neither is it just a lowly snack that you settle for because it’s there.

Nang Piling, a 75-year-old grandmother from Labangon who only wants to be known by her nickname, has been making binignit ever since she can remember. And to her, like most Cebuanos, binignit is so much more than just a hearty snack. Teeming with local produce and immortalized in our collective memories, binignit is a distinctly Cebuano soul food that evokes nostalgia for one’s childhood and home.

And this cornucopia of a soup, although a common merienda fare, takes center stage during the Holy Week and especially on Good Friday. “My family always had this during Good Friday,” says Jorgelynne Ang, 27, of Talisay City. “We used to take this for granted when we were kids because it was always there but now that my siblings and I are all grown up, we always look forward to having this whenever we go home for the Holy Week.” However, no one knows exactly how this comfort food came to be a Holy Week staple. For Mars Espera, host of The Food Show Cebu, binignit during Holy Week is all about sacrifice and family tradition.

“Binignit has always been my family’s staple food every Lenten season,” says the TV personality. “It is a tradition that is carried through generations. More than a tradition, it is a culture of the Cebuanos to sacrifice a little bit of their usual comfort food for the Holy Week.” According to travel writer and rural tourism advocate Boboi Costas, binignit is believed to have existed even before the introduction of Lent by the Spaniards into our country. “My guess is that we’ve been eating root crops and fruits even before the Spanish came,” he says. “So it follows that whether it is the Holy Week or any other time, the binignit antedates the Cebuano’s penchant to have it during Lent.”

He explains that one of the possible reasons  Cebuanos traditionally prepare binignit especially during Good Friday is because it doesn’t have any meat in it. As Catholics, Cebuanos practice fasting and abstinence and shun meat especially on all Fridays of the Lenten season.

Costas adds that in the rural areas, cooking binignit during Lent is a communal affair. “Neighbors congregate on the street to prepare it,” he says. “When the time to eat comes, the whole neighborhood shows up.”

Cooked in coconut milk and coconut cream and thickened with glutinous rice, binignit is a mixture of various local ingredients such as taro (gabi), sweet potato (kamote), purple yam (ube), plantain (saba), tapioca pearls (sago), jackfruit and palm flour jelly balls (landang). To prepare, the coconut milk is brought to a simmer before the glutinous rice is added. After about 8 to 10 minutes of occasional stirring, the taro, sweet potato, purple yam and palm flour jelly balls are then added.

Once tender, the plantain, tapioca pearls, and jackfruit follow the previous ingredients into the stew. When the mixture starts to thicken, coconut cream and sugar are added last. Stir the stew for a couple more minutes until all of the ingredients are cooked. However, avoid bringing it to a boil as the liquid will curdle. Binignit is best served hot although with the summer heat beating down on us, it wouldn’t be such an unfamiliar sight to see people pair their bowl of this comfort food with a glass of ice-cold cola.

For Nang Piling, who sees binignit as symbolic of how we, as a people, despite differences in views and ideals, are bound together in faith, this dish will always be a part of who we are and what makes us truly Cebuano. And giving her personal take as to what makes this dish a popular Holy Week go-to food, Nang Piling laughingly remarks before walking away to sell her wares: “Binignit aron malangit  (Eat binignit so you can get to heaven).”

Read Next
Security raised in ports, terminals for Holy Week