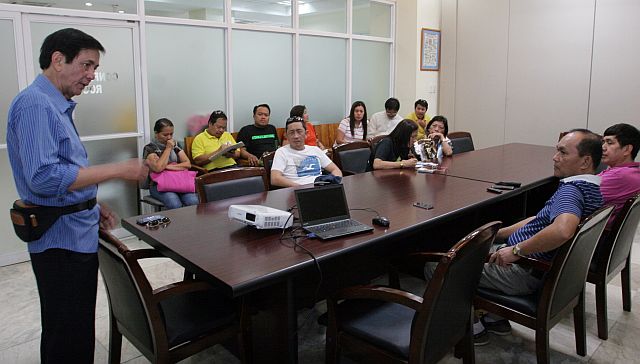 Cebu City Mayor Michael Rama (standing) in a meeting with representatives of the Metro Cebu Water District (MCWD) and other stakeholders on the water crisis in Cebu. (CDN PHOTO/JUNJIE MENDOZA)

When Cebu City Mayor Michael Rama sounded the call for stakeholders to help the city overcome its water shortage last week, among those who responded was former Cebu Governor Lito Osmeña.

In a letter sent to the mayor, Osmeña said he is preparing to supply 6,000 cubic meters of water a day for Barangays Taptap, Tagbao and the Lusaran river areas at his own expense.

“As you have declared a state of emergency due to the water crisis and despite my having declined your request to oversee the water situation in Metro Cebu, I have proceeded on my own,” the former governor said.

Osmeña referred to Rama’s previous offer for him to serve as “El Niño crisis manager” which he declined on October 20 last year.

Osmeña said the water he would supply should be prioritized to mountain barangays.

“(I ask that) this activity be endorsed to Congressmen (Raul) del Mar, (Rodrigo) Abellanosa and the City Council,” Osmeña said.

The former governor said Cebu faced a water supply and distribution problem even before the onset of the El Niño.

Osmeña said the only solution to a severe drought would be desalination “which is capital intensive.”

Rama said he will hold another meeting with stakeholders including national government agencies to resolve the water supply problem.

Rama said the city may resort to renting water trucks to deliver water to barangays especially those in upland areas.

He said there were already a few barangays that were receiving potable water.

The mayor said water refilling stations should come in and distribute free excess water to households.

Tisa Barangay Chairman and Association of Barangay Councils (ABC) President Philip Zafra said that they wished that stakeholders would attend the meeting to help the city government come up with better solutions to the problem.