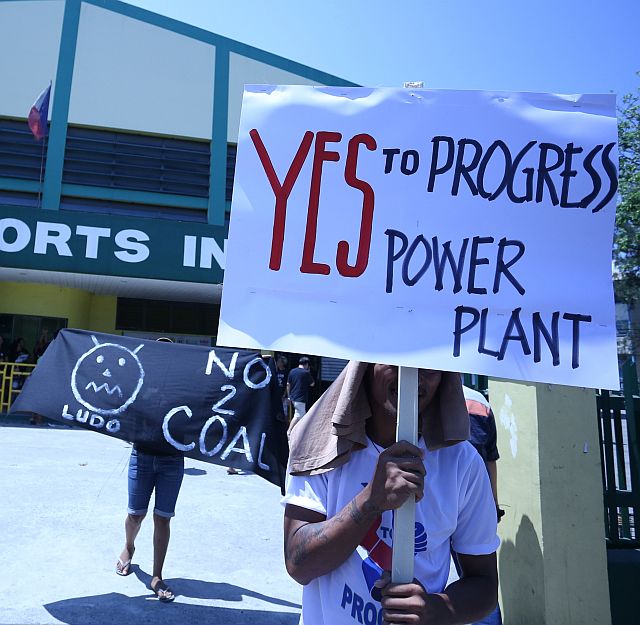 COAL PLANT: A backer and opposer of the coal-fired power plant display their sentiments during a public hearing. The Cebu City Council has scheduled another meeting for all stakeholders tomorrow, Friday. (CDN PHOTO/LITO TECSON)

Some Cebu City councilors raised this question to the proponent of the 300-megawatt coal-fired power plant in Barangay Sawang Calero during their regular session yesterday.

But this raised a red flag to the councilors, especially Councilor Nida Cabrera, who heads the city council’s  committee on environment, since she has yet to come up with a report on the project taking into consideration a public hearing conducted at the site last Sunday.

“Ambot nila nganong gadali sila (I don’t know  why they are rushing it). They still have to present their Environmental Impact Assessment (EIA) to us. But no, they want to already push through with the approval,” Cabrera told Cebu Daily News in a phone interview last night.

She explained that her committee, together with other members including Councilors Nestor Archival Sr., Margarita Osmeña, Alvin Dizon and Gerardo Carillo, are scheduled to meet today to assess the recent public hearing.

Another meeting with stakeholders is also scheduled tomorrow (Friday), said Cabrera, to include representatives from Ludo, the residents who are opposing the project and other government agencies, like the Environmental Management Bureau (EMB) of the Department of Environment and Natural Resources (DENR), the Department of Health, and Department of Energy (DOE), among others.

“Dili ni basta basta; nga dili nato paminawon sila. Ang nakasayop nila is ila gidiretso pangayo ug approval sa barangay officials nga wala’s tarong nga public consultation (This is not something that you can rush. We really have to hear all sides. Their fault was they directly asked for approval from the barangay officials without a proper public consultation),” Cabrera told CDN.

In an interview, Ludo’s community relations officer Nelson Yuvallos explained that they were trying to catch up with a delayed timeline, as it might affect the P3.8-billion project loan that they were securing from an international bank.

“A project this big needs international funding. The problem is if we can’t start already, we will incur a lot of cost. That is our worry,” he told CDN.

He said getting a favorable endorsement from the city council would just be 25 percent of their entire paperwork. After which, he said, they would still have to apply for an Environmental Compliance Certificate (ECC) from the EMB.

Yuvallos said they worked on the funding for the past two years before starting with the public scoping of the project.

EMB 7 regional director William Cuñado explained that in public scoping, the project proponent would have to conduct several dialogues with stakeholders, taking note of their issues and concerns.

“They will have to consolidate all of that information and look for mitigating measures based on the issues raised. They will then have to make a report which they will have to present to the city council,” Cuñado told CDN.

A group of Sawang Calero residents have, however, raised strong opposition to the project. They have so far gathered around 2,000 signatures for its anti-coal power plant petition that was submitted to Cabrera’s office yesterday.

The group of anti-coal residents has also launched an online petition against the project at change.org.  As of 7 p.m.  yesterday, it has already gathered 791 supporters.

Representatives of Ludo went to the city council’s regular session yesterday because the proposed resolution of Councilors Richard Osmeña and Noel Wenceslao was reintroduced in the council’s agenda after being withdrawn by Osmeña two weeks  ago.

In an effort to convince the council to endorse the project, Yuvallos told the councilors that they were willing to finance the holding of a referendum among the registered voters of Sawang Calero to determine who among the residents are in favor of and against the project.

“We can always sign an agreement between our company and the councilors that we will adhere to whatever is the result of the referendum,” he told the council.

Yuvallos assured that they would cease all their operation and terminate the paperwork for the project  if the referendum would show that most of the residents would oppose the construction of a coal-fired power plant in the barangay.

But Dizon said it would be inappropriate for Ludo to sponsor the referendum, even if would be the city government that would conduct it.

Yuvallos said they have been conducting their own set of sorties to convince residents of the safety of the new coal plant.

He also pointed out that Ludo even sponsored a familiarization visit to the Sual Power Plant in Pangasinan with members of the media and barangay officials last week where they showcased the 1,218-megawatt plant’s environmental measures.

He said they invited some environmental groups and residents opposing the project to join the tour but they refused.

Osmeña, upon seeing video of the Sual plant,  however, noted that the Pangasinan power plant was situated far from a residential area while that in Sawang Calero would be surrounded by houses and is even adjacent to an elementary school and a center operated by the Missionaries of the Poor.

“I think what we need to have is public acceptance. They live there. It is best that they understand what’s going to happen. But we cannot erase the fact that many of them are in fear of the unknown. Just let it go through the process,” Osmeña said.

Councilor Mary Ann De Los Santos also pointed out the rush in the bid for the council to endorse the project.

“I suggest we respect the (environment) committee and let them go through the process of evaluating everything. I cannot fathom why are we in a hurry? It seems like we are creating a shortcut. We haven’t listened to the report and recommendation,” De Los Santos said.

For his part, Councilor Alvin Arcilla also said he wanted to know more about the project,  including its waste management systems, plant layout and aerial view of the proposed facility.

The councilor later agreed to defer action on the proposed resolution endorsing the project. Part of those to be resolved by Cabrera’s report would be  whether or not they should push through with the plan for a referendum.

If a  referendum would push through, Councilor Hanz Abella said it should be conducted by a “credible and independent” agency.

Councilor Gerardo Carillo also said Ludo should also inform and educate the people more about their project so they could come up with an informed decision.