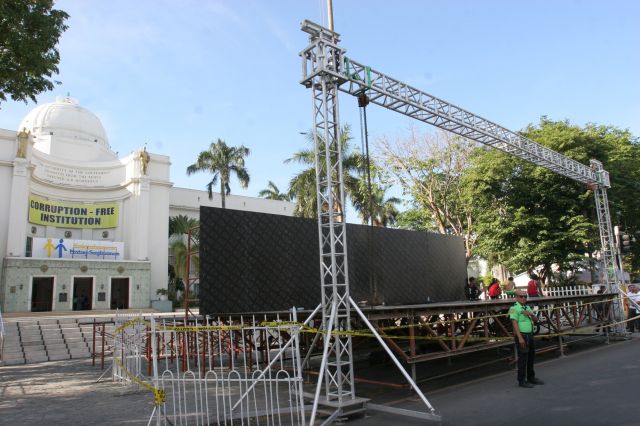 A stage is being set up in front of the Capitol building in preparation for the Liberal Party (LP)–Bando Osmeña-Pundok Kauswagan (BO-PK) rally this afternoon, which will be graced by President Aquino. (CDN PHOTO/JUNJIE MENDOZA)
n0427-1

AT least 500 policemen would be deployed all over Cebu today as President Aquino visits Cebu for the second time in just over a week to endorse local political allies led by former Cebu City mayor Tomas Osmeña and Gov. Hilario Davide III.

The President, who will be arriving in Cebu along with Liberal Party’s standard-bearer Mar Roxas and running mate Leni Robredo, would also witness the signing of a covenant between Davide and Osmeña to settle the land dispute between the city and the province involving Provincial Ordinance 93-1.

Supt. Armando Radoc, directorate chief of staff of the Police Regional Office in Central Visayas (PRO-7), said that the 500 police officers would be on the streets to secure President Aquino during his participation in two events today in the cities of  Mandaue and Cebu.

“We will of course secure his arrival, deploy police officers on the route, the venue itself and his travel back to the airport,” said Radoc.

President Aquino would first attend a job affair organized by the Department of Labor and Employment Central Visayas (DOLE-7) in Mandaue City, to be participated by about 46 employers and 3,000 job seekers as a prelude to the Labor Day celebration on May 1, before he would proceed to Osmeña Boulevard for the LP rally to be held in front of the Capitol building and initiated by Bando Osmeña-Pundok Kauswagan (BO-PK) headed by Osmeña, the former mayor and south district representative of Cebu City who is now challenging the reelection bid of Mayor Michael Rama.

Philippine Information Agency in Central Visayas (PIA-7) Assistant Regional Director Fayette Riñen, in a briefing yesterday, said the President would stay at the job fair for about an hour together with Labor Secretary Rosalinda Baldoz but would not be expected to give any speech there.
At 5:30 p.m.,  Mr. Aquino would proceed to the Cebu Provincial Capitol grounds for the LP rally and proclamation of BO-PK slate led by Osmeña.

Osmeña and Davide, the LP Cebu chairman, were set to sign in the presence of the President a covenant to address disputes surrounding Provincial Ordinance 93-1, a 1993 measure that allowed occupants of province-owned lots in Cebu City to buy the properties they had occupied for years.

During Rama’s term, the city offered to pay P500 million for the lots and for the city to, in turn, collect payments from occupants. The negotiation, however, hit a snag after the Davide administration, noting that the properties that Cebu City wanted to buy were already valued at P2.3 billion, asked for a 3.3-hectare lot owned by the city government at the North Reclamation Area on top of the P500 million cash offer.

Rama’s offer did not also sit well with Capitol officials due to the likelihood that the lots could be used for commercial development, to the disadvantage of its intended occupants.

“(We will) guarantee (in) 60 days, the occupants will have their wish. We will liberate them from the eight years of fickleness and empty promises of (Cebu City Mayor Michael) Rama,” Osmeña said.

“It can only happen if Davide and I are elected,” he added.

Osmeña did not elaborate on the contents of the covenant, saying it would be revealed in today’s program.

Rama criticized the move, especially since he said the city government has been actively negotiating with the provincial government in order to solve the issue.

“Who will decide on the agreement if he loses? What authority does he have in signing? If he will lose, who will implement it? Junjun Davide should be mindful. You’re thinking too much of politics. I’ve been telling you to solve it together and we can solve it together,” Rama said in a separate interview.

To recall, the city government has formally sent an offer to the provincial government to buy all province-owned lots located in the city for P500 million. The city will then be the managing it through their socialized housing program.

Majority of the crowd expected in today’s rally at the Capitol would be urban poor groups and beneficiaries of the 93-1, said Cebu City Councilor Alvin Dizon of BO-PK.

Osmeña, on his Facebook page, apologized to the public for the traffic that might be caused during today’s activity.

“We will be signing this pact in front of all the families affected by 93-1, so please forgive us for the traffic that will happen on Escario St., M. Velez, and  Osmeña Blvd. I just wanted to let you know ahead of time,” his post read.

“If anyone wants to join us to support this program, you are of course welcome! Sorry for the inconvenience! Cebu Cit is under repair,” he added.

Closure will start as early as 1 p.m.  although the event was scheduled to start at 3 p.m. and to end at 8 p.m.
“We will be deploying an additional 30 traffic personnel to the existing 10 personnel in the area,” said CCTO operations chief Jonathan “Joy” Tumulak.

The job fair, meanwhile, would be held at the Mandaue City Sports Complex starting at 8 a.m. up to 5 p.m., with at least 16 overseas companies and over 20 local companies participating, said city information officer Roger Paller.