Duterte presidency would be ‘chaotic’ 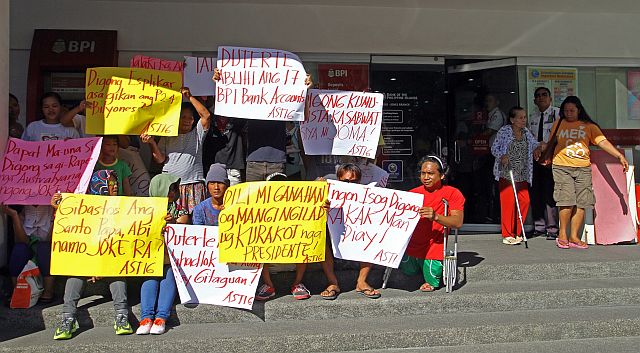 A group gathers in front of a Bank of the Philippine Islands (BPI) branch to press presidential candidate Rodrigo Duterte to open his accounts. (CDN PHOTO/TONEE DESPOJO)

Interviewed by reporters yesterday, the former governor, who was a street parliamentarian during Martial Law said a Duterte presidency would mean “chaos” based on the statements he has made regarding policies he would adopt if elected president.

He specifically mentioned the Duterte’s statements that he would cut ties with the United States and Australia whose ambassadors had criticized his so-called “rape joke” as a reaction to the rape-slay of an Australian missionary.

“Our allies are our protection whether we admit it or not,” he told reporters.

“My idea of a president is one who might not be able to do much for the country as much as we want but who will definitely not do anything to damage it more. Dili na nato tiwasan ug guba bah. (Let’s not worsen what is already broken.) We cannot get a perfect president… Pero ari lang ta sa presidente nga dili lang ta mosamot ka-empyerno, (But let’s go for a president that will not worsen our hell),” Dela Serna said.

An entrepreneur and law professor, who used to support Duterte, said she can no longer vote for the trash-talking mayor.

“When campaigns began, I was for Duterte. I was not sure I was voting for anyone, but if I was, Duterte was certainly on top of my list,” lawyer May Pono said in a Facebook post.

She said she changed her mind when she saw the video on the rape joke.

“Honestly, I retched. Sure, I heard jokes of the same tenor before – among drunk men. But it is a joke I cannot accept from someone who will sit in the highest position of the land,” she said.

“Yes, we are a free country and we are free to do and say anything we want to do or say. But when a person leads an entire nation, he must shed off some of those liberties. There are things he can no longer say and things he can no longer do – all because the image he keeps is the same image that his nation will have before other nations,” she added.

Pono said a person does not gain more rights when he becomes President.

“On the contrary, he loses some of them. But Duterte does not seem to understand this,” she said.
She pointed out how Duterte was quoted as saying he will abolish Congress if he is impeached. He also said he will sign his own pardon so he cannot be prosecuted for all the murders that he will commit.

“It is a sad day for me because the only man I thought would bring change is a man I cannot, in conscience, vote for. Sure, I would not want to vote for a man who pretends to be good, but should I vote for someone who openly admits to being bad simply because he is being honest? I think not,” she added.

Duterte has been accused of having hundreds of millions in two accounts with the Bank of the Philippine Islands (BPI).

A group of people converged in front of the BPI branch along Osmeña Boulevard yesterday to call on Duterte to disclose his account alleged to contain P211 million.

Under the hot, humid weather at past 3p.m., the group rallied in front of the bank, bringing posters and placards and shouting “Ablihi” (open it).

“We are neither pro nor Anti-Duterte but we are here to call on him to open his bank accounts and reveal the truth about it,” said Dean Siangco, designated spokesperson.

He said they are all neighbors in Sitio Silangan 1 who organized themselves and went to BPI to hold the rally.

A spokesperson from the Cebu for Grace Poe Movement Cebu Chapter arrived sometime later and gave out press statements to the media, making a similar call.

Meanwhile, a member of the Cebu for Roxas-Robredo Silent No More, supporting the Liberal Party bets said he used to be a Duterte supporter but changed his mind when he witnessed the actuation and remarks made by Duterte during the second Presidential Debate in Cebu last March 20.

“I put aside my biases and pride and objectively analyzed the matter at hand. I realized Duterte is not fit for the presidency. He is not qualified for the position,” said Rudy Alix.

In a statement, the Duterte camp called the gathering as “another desperate move of Mayor Rodrigo Duterte’s political foes”.

“The activity was clearly staged and sloppy. Take a look at the placards posted in Facebook. It is clearly written hastily by just one person,” Eric Bucoy, Visayas campaign manager said in a statement.

“Moves like this would not derail the momentum the Duterte campaign has achieved. We are now moving ahead with our Miting de Avance and Election Day preparations while our opponents are desperately scrambling to derail us with pitiful activities. Looy sab,” he added.

Provincial Board Member Arleigh Sitoy, a staunch Duterte supporter said all the controversies hurled against the Davao mayor are “desperate political moves”to discredit him and for them to gain sympathy.