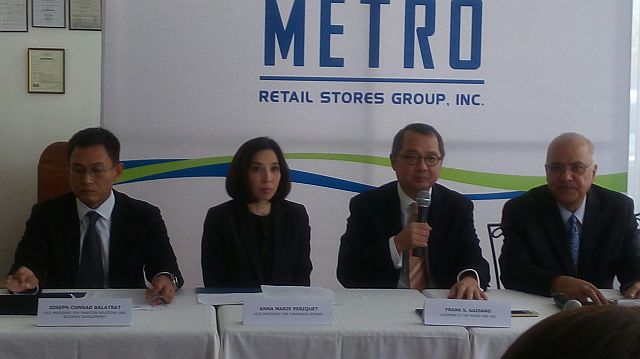 Gaisano-led retailer Metro Retail Stores Group, Inc. plans to open additional supermarkets or hypermarkets outside the highly urbanized cities of Cebu in the next five years.

Joseph Conrad M. Balatbat, vice president for business development and investor relations, said they were looking for potential sites in the north as well as in the south. Mactan Island is another potential location.

“We are looking at surrounding towns because the city itself and Mandaue are very saturated. We’re looking up north and also in Lapu-Lapu (City) in Mactan. There’s a lot of potential in the south as well,” he said in a press conference after the annual stockholders meeting on Friday.

There is a Metro store as far north as Bogo City, about 100 kilometers north of Cebu City. Balatbat said they were looking for a site between Bogo and Metro Cebu.

The company is also looking at more neighborhood stores.

“We feel that with the busy lifestyle of a lot of people and the traffic, there will be a clamor for smaller retail formats closer to home,” he said. He was referring to stores that are conveniently located within the community and provide grocery items, but not impulse items.

Smaller retail formats, which would have a size of 2,000 to 3,000 square meters, would comprise about 5 percent of the 160,000-sq.m. additional gross floor area that Metro has programmed for the next two-and-a-half years. The company aims to double its footprint, estimated at 400,000 square meters as of end-2015, in five years.

Asked if they were acquiring smaller retail outlets similar to Tita Gwapa, Balatbat said they were “always in discussion with certain parties for potentially acquiring their business.” Tita Gwapa was a grocery chain in Cebu that Metro acquired in 2011 and has since been renamed as Metro Fresh N Easy stores.

“In certain areas, that’s probably the best way to go. In the Visayas, we probably still have quite a number of sites available for putting up new stores.

But in certain areas like Manila, the central locations are already taken and the option that we have would be through acquisitions,” Balatbat said.

Metro recently opened its 48th store at UP Town Center in Quezon City and will open in Fairview Terraces Mall in a few days. The store assets were acquired by Metro from SIAL Specialty Retailers, Inc.

“We’re going to be discussing with (Taft) their projects, including Mandani Bay, so we can see where we can fit as retail provider,” Balatbat said.

Company executives said between P10 billion and P15 billion will be allotted for capital expenditures in the next five years. The amount includes the P1.7 billion to P2 billion set aside for this year and P2 billion to P2.5 billion for next year.

Balatbat said this would be financed by internally generated funds and the remaining balance of the company’s initial public offering (IPO) proceeds in the first two years. After that, the company will tap the debt market.

Read Next
Time to vote