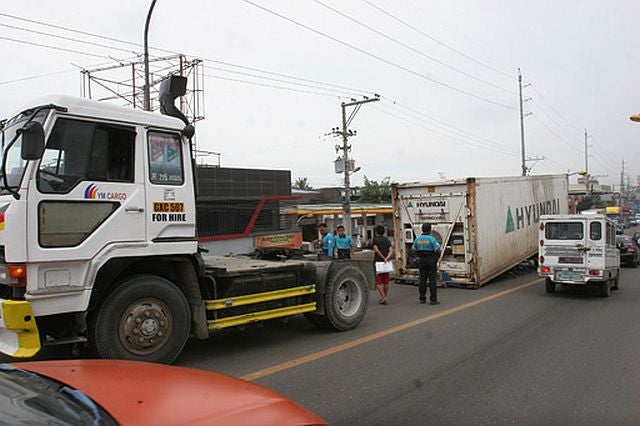 The prime mover was about to climb the flyover when its container van was detached about 9:50 a.m. on Thursday. (CDN PHOTO/JUNJIE MENDOZA)

MANDAUE CITY, Cebu–Traffic was heavy in some parts of this city after a prime mover was detached from its container van while trying to go up to the flyover in Barangay Maguikay, Mandaue City.

These include Innodata area near Barangay Mabolo, Highway Seno and MC Briones Street.

Antigua said they were still waiting for YM Cargo, owner of the prime mover, to send or its owner to send in a crane to lift the container van and attach it to the prime mover.

The container van contained frozen meat which was supposed to be delivered to northern Cebu.

The prime mover was about to climb the flyover when its container van was detached about 9:50 a.m., said Antigua.

He said they had to close the flyover’s northbound lane and divert traffic flow below the flyover. But its southbound lane remained open for vehicle traffic.

Read Next
Spreading Dharma through the Temple of Buddha