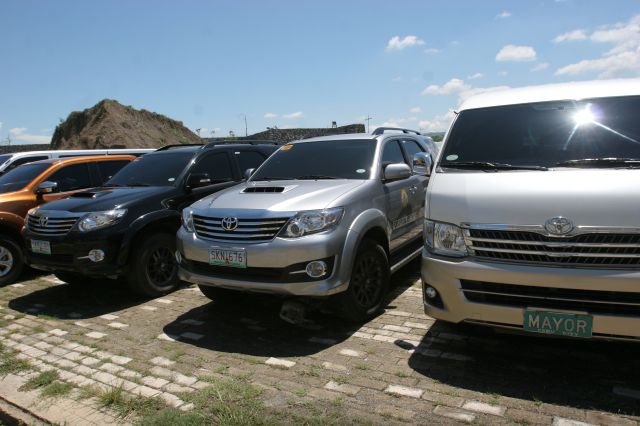 These are among the government-issued vehicles returned to the Cebu City government for inventory and include two Montero Sports SUVs which are not covered by Purchase Orders. (CDN PHOTO/JUNJIE MENDOZA)

For failing to return their government-issued vehicles to the Cebu City government, 47 barangay captains and officials are facing a slew of criminal and administrative cases before the Visayas Ombudsman from carnapping to malversation of public property, grave abuse of authority, grave misconduct and gross insubordination.

“‘Please’ did not work. I said ‘Please return the vehicles’; it did not work for them,” said Cebu City Acting Mayor Margarita Osmeña after filing the complaint on behalf of the City of Cebu before the Visayas Ombudsman yesterday.

The criminal complaints are Carnapping, under R.A. 6539, Malversation of Public Property under the Revised Penal Code, Violation of the Anti-Graft and Corrupt Practices Act Sec. 3-E or “causing undue injury to any party including the government”, and Violations of the Code of Conduct and Ethical Standards for Public Officials, Section 4, a,b,c, and d, which deal with professionalism, political neutrality, upholding public interest and not giving undue favors.

The administrative complaints are Gross Misconduct, Gross Insubordination and Grave Abuse of Authority.

Osmeña, in her Complaint-Affidavit, also asked the anti-graft office that the barangay officials be placed under preventive suspension, pending the investigation “considering that the evidence of guilt is strong and the charge against them involves grave misconduct and their continued stay in office may prejudice the case I filed against them.”

She said the 47 barangay officials should be charged with carnapping for their “deliberate and unjustified failure and/or refusal to return the subject vehicles to the Cebu City government despite receipt of the memorandum demanding their return.”

On May 17, Osmeña issued a memorandum directing all barangay officials and employees of the Cebu City government to return all the vehicles issued by the city government, not later than May 24, for inventory.

Some barangay officials returned their City Hall-issued vehicles after the deadline set but were still included in the complaint.

“It’s because the deadline was already given. If I just use a comparison, it’s just like the calamity aid. You know some councilors paid it back. Even Joy Pesquera paid for Mike Rama. But it didn’t matter anymore sa case,” she said.

(If we are afraid of Margot (Osmeña), our chances are lost. We will always be scared. There is no basis for the carnapping charge. But it is her right. But sometimes they should also look at the real reason because clearly this is political harassment.

But Acting Mayor Osmeña said Ayuman can say whatever he wants.

“You know even some of his colleagues returned their vehicles. The vice mayor returned his vehicle. Is that harassment? I don’t think there is harassment there,” Osmena said

Ayuman said the vehicles are their service vehicles for their constituents, and not like what incoming Mayor Tomas Osmeña did when he received a donated Dodge Charger vehicle and sold it.

“It’s none of their business. They do not own the Dodge Charger. So what are they talking about? Paulit-ulit gyud na. Where is Where is deed of donation? Very basic,” Tomas said in a press conference when sought for comment.

Philip Zafra, who is also Tisa barangay captain, said he respects the decision of the acting mayor but declined to comment further, saying he has not yet received the official copy of the complaint.

Ayuman said they have not conferred with the rest of the barangay officials included in the complaint, whether they would face the charges as a group or individually.