Stephen Dano was not even ten years old when he tried all sorts of vices, including illegal drugs.

He stopped schooling when he was in his fourth grade because his parents, from Barangay Quiot in Cebu City, did not even have enough to feed all their seven children. His father was a construction worker and his mother ran out of capital to keep her small carenderia (eatery) open.

“I had to stop studying. I wanted to work to help my parents so that I can someday continue my schooling,” said Dano, now 23, in an interview with Cebu Daily News at the Parian Drop-in Center, a Cebu City-run shelter for street children.

And work Dano did. He collected garbage for a few coins. He sold candy, cigarettes and food on the street. But not for long. His exposure to the street life led him to peer influence on vices. At first, it was just smoking cigarettes and a little rugby sniffing. Then he went on to smoking marijuana, inhaling shabu (methamphetamine hydrochloride), and even started using injectable drugs.

“Sometimes when I don’t have the money, I would just buy cheap drugs like amoxicillin (antibiotics) and take lots of them at the same time just to give myself a high. At times, I even inhaled gasoline,” said Dano, who is now a junior Education student at the Asian College of Technology (ACT).

It came to a point that he began to get involved in petty street crimes, which led him in and out of prison, since the Juvenile Justice Law was not yet in place then. The times he was out of prison, he was back on the street, going home only once or twice every three months.

Dano did this for around seven years.

But it was also peer pressure that led him back on the right track.

“One of my friends in the street invited me to go to the Parian Drop-in Center where he was staying after being rescued by social workers. I thought why not? At least I can rest, I have shelter and I have food,” he recalled.

He stayed at the center for six months before being referred to one of the non-government organizations (NGOs) that was a member of the Cebu City Task Force on Street Children (CCTFSC), which oversees the operation of the drop-in center.

Dano was 16 years old at that time. He was referred to the Cebu City Community Scouts Center, where he spent most of his rehabilitative years.

It wasn’t easy, Dano recalled, as he suffered from withdrawal symptoms common to substance abusers . A few times, he sneaked out of the center to smoke cigarettes or take drugs.

But eventually, aided by the workers at the center, he began changing.

The task force, which is the umbrella organization of around 25 NGOs working for children protection and welfare in Cebu, has been holding different events and activities where the kids from the different centers meet and interact. Among them are summer leagues, summer camps, basketball tournaments, talent showcase, counseling and group discussions.

“I realized, wow, it’s so nice being a kid. I wasn’t able to experience this before,” Dano recalled.

They also had peer discussions where they were briefed and taught about current social issues like child pornography, human trafficking, illegal drugs, among others, he said.

In the six years that he stayed at the center, Dano was also able to catch up on his learning. Through the Alternative Learning System (ALS), Dano was able to skip Grade 6 as well as the third and fourth years in high school.

Eventually, he ended up at the Justice, Peace and Integrity of Creation (JPIC) Integrated Development Center Inc. where he is currently one of its social workers. 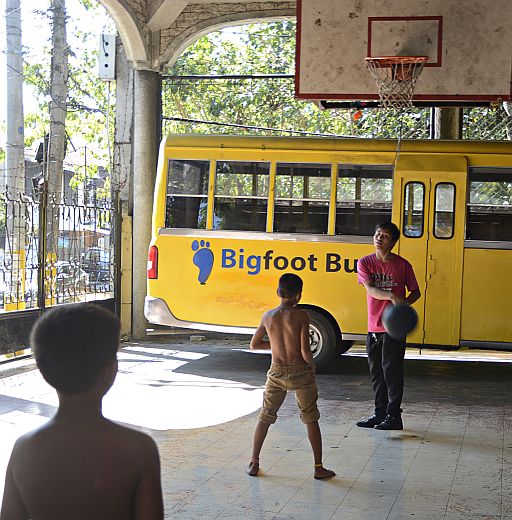 As Dano continued to share his life experiences, he was obviously getting more enthusiastic — shifting forward on his chair to be more engaging and even smiling and laughing.

There was no sign of hesitation despite his past vices. This, he said, is part of their training.

“We were really taught to accept ourselves at that time and to accept our past. Only then were we able to look forward to the future,” he added.

He also lives again with his parents in Barangay Quiot.

Now, Dano is one of the facilitators of JPIC’s mobile school program, a fulfillment of his wish to teach and reach out to children.
Dano is natural with kids.

At the Parian Drop-in Center, after the interview, he immediately made friends with two boys playing basketball. He played for a bit with them even while he was in slacks and leather shoes.

“I can remember that I was once one of these street children. I was like this before. I can understand them more because I went through all of this. I am more patient. It gives me hope that they can also change because I changed,” said Dano, specifically referring to the more troubled street kids.

After getting his education degree, Dano said he would want to take up law while continuing his social work. He believed that if a person achieves greater things, he can also do much greater things for others.

Stories like that of Stephen Dano keep the CCTFSC social workers going.

Established in 1991, the task force has been witness to countless street children who have now reached or are on the way to reaching their potentials.

Redenter Betito, CCTFSC program coordinator, was himself a beneficiary of its programs.

“I was a working kid. I used to arrange the bowling pins manually at Patria de Cebu’s bowling alley. Then I was able to participate in the programs of the task force,” he told CDN.

Right now, the Parian Drop-in Center has over 30 kids waiting for referral to other centers with different specialties.

Betito said he could only hope that these children will all one day become productive citizens of the country.

Read Next
Hontiveros vows to defend an ‘independent’ Senate