Signal Number 1 up in 5 provinces 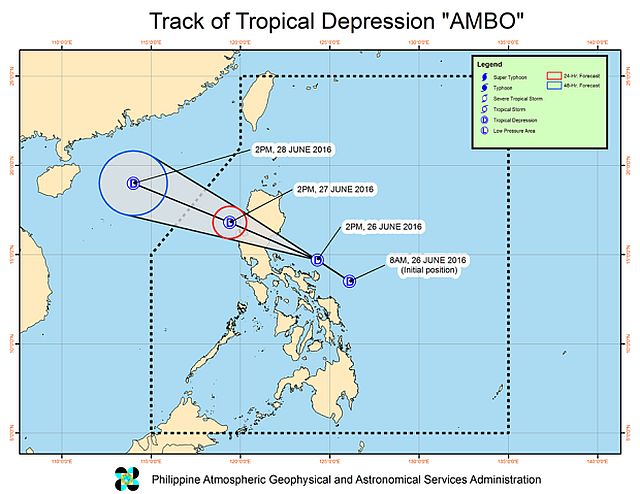 Tropical depression “Ambo,” the first to enter the country this year, slightly gained speed as it prepared to make landfall in Aurora province, the state weather bureau said on Sunday.

In a 5 p.m. weather bulletin issued by the Philippine Atmospheric, Geophysical and Astronomical Services Administration (Pagasa), Ambo was now moving at 22 kilometers per hour (kph) in a west-northwest direction. It packed maximum sustained winds of 45 kph near the center and was located 140 kilometers northeast of Virac, Catanduanes.

Local government units have announced the suspension of classes on Monday, June 27 due to the effects of tropical depression “Ambo.”
Pagasa weather forecaster Aldczar Aurelio said in a televised press briefing that with Ambo’s current speed, it might exit the Philippine Area of Responsibility on Tuesday.

It was also expected that the tropical depression might weaken when it would make landfall in Aurora by this morning.

Ambo was projected to be 130 kilometers northwest of Dagupan City by this afternoon and 705 kilometers west of Laoag City by Tuesday afternoon.
The state weather bureau said that occasional moderate to heavy rains are expected to hit Northern and Central Luzon, Calabarzon (Cavite, Laguna, Batangas, Rizal and Quezon), and the Bicol (Albay, Sorsogon, Camarines Sur, Camarines Norte, Catanduanes and Masbate) regions.

Read Next
Palace hands off on Comelec rift