Ex-addict tries to save other addicts 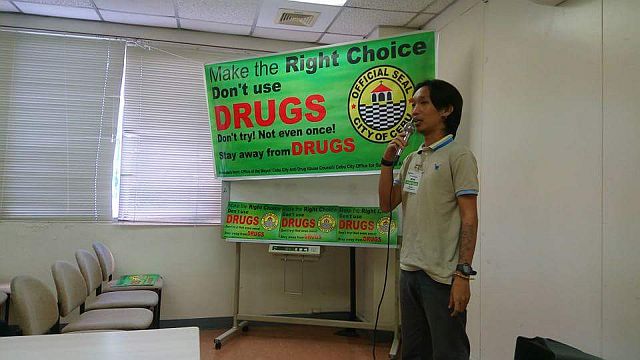 Bryan Young talks about his life as a drug addict and how he turned his life around and lived a “clean” life during a We Care program session. (CONTRIBUTED PHOTO)

Bryan Young has probably tasted all kinds of prohibited drugs.

He started with cough syrup when he was only 10 years old, and he shifted to marijuana when he turned 12.

Young said he also tried Valium and Dormicum, among others.

“My 17 years as a drug addict can be a painful reminder to me and to some. But now that I am clean, it serves as proof that there is still hope for those hooked into this kind of vice,” Young said in an interview with Cebu Daily News.

He said that he has lived a “clean” life for the last 9 months.

Young, who believes that drug addicts are not hopeless cases, shared his life story as a drug addict, a drug pusher, a drug addict undergoing rehabilitation, and eventually a volunteer recovery coach for the We Care program, which is the drug recovery program of Cebu City Office for Substance Abuse and Prevention (Cosap).

“Only an addict can understand an addict, and that’s why I want to help them out from the life they are into,” he added.

When FIX recruited Young to be a recovery coach for We Care, he said he did not hesitate to accept the offer because opening up and sharing his life as a former drug addict was the greatest relief he found on his way to recovery.

FIX is a subsidiary of Family and Recovery Management (FARM), a private institution providing rehabilitation centers in Bohol and Cebu and Cosap’s partner in their We Care program.

Utlang also said in an earlier interview that the program was the city government’s way to help drug users to recover, and was intended for casual drug users and dependents and not long-time drug addicts.

For Young, it all started with alcohol when he was 10 years old, and abusing cough syrups and marijuana at 12. From there, he began to explore the world of narcotics.

He was barely in his teenage years when he tried Valium, Dormicum (the laymen’s Midazolam, an ingredient used in manufacturing anesthesia and sedatives for surgical procedures).

Young said his friends introduced him to all sorts of illegal drugs – except methamphetamine, or locally known as shabu.

He comes from a well-off family in Tacloban City, and his mother, who was a government employee, raised him and his brother, whom he described as an achiever.

Young was also a scholar at a high school in Leyte in the early 2000s and a volleyball player of that school.

He said at that time, he still had control over his drug intake, and he only used drugs to trigger his productivity for huge projects and before the start of sports events.

He said both his academic and extracurricular performances were above-average, and he graduated from high school without worrying about his grades.

Turn for the worse

His life as a drug dependent, however, took a turn for the worse when he arrived in Cebu for his tertiary education. He took up a nursing course in one of the colleges here.

He was surprised then at how cheap commodities and food, and even the drugs, were in Cebu.

Young claimed that a packet of shabu in Tacloban costs about P1000 while one can just buy it here for P500 or less in Cebu City.

“I knew and saw the deteriorating effects of being addicted to meth. That’s why I avoided them back in high school. But my roommates and some of my friends insisted that it was better stuff, and a few weeks later, I found myself using some of it,” said Young.

Using shabu later caused him to have behavioral problems such as being indecisive most of the time and displaying a hostile attitude toward his mother, who eventually found out that her son was into drugs.

He was then sent back to Tacloban. He was, however, lucky when he got an athletic scholarship in a school there, freeing his family of financial obligations for his schooling except for his allowances.

His mother, who did not know how deep he was into drugs, continued giving him his allowance which he spent mostly on drugs.

He began to take more doses of shabu, which brought him closer to becoming a full-fledged addict of the drug. He also started experimenting with heroine.

Then one day after he graduated from college and his mother stopped giving him money, he realized that he could save a lot if he would buy drugs in large volumes.

From user to seller

He bought the drugs in bulk, employed his friends to help sell the drugs, and he even had some left for his personal consumption.

He said he had a supplier from Ormoc City – a city two-and-a-half hours away from Tacloban City. He kept his drug peddling small, with his friends and neighbors as his buyers.

When his ex-girlfriend gave birth to his first daughter, he decided to stop his activities and called his supplier that he wanted to quit buying and peddling shabu from him.

However, his supplier gave him two last tasks before quitting the trade.

The first task lasted for five weeks, in which he needed to deliver 5 grams of shabu from Ormoc City to Palompon, Leyte, which he accomplished.

The second task was for him to dispose of half a sack of shabu with his supplier staking a P16.3 million cut of the profit.

Young said he immediately got to work and hired four of his friends to help him sell the 25 kilos of shabu.

He said he earned P21 million and gave the supplier his cut and then he quit.

He said the money he earned from that deal was spent mostly on the schooling of his daughters.

But when his money ran out, Young turned back to selling and using drugs.

Young said this was the start of a series of unfortunate events that led to his recovery.

Two years after Yolanda struck, Young found himself homeless and sleeping in the streets. His mother had migrated to the United States and remarried, and he was estranged from his two daughters.

So, he returned to sleeping in the streets.

He said that the first few days of his rehabilitation were tough and he even doubted he could fully change but in the end, hope prevailed./UP Cebu Intern Morexette Marie Erram

Read Next
Tourism chief: Duterte okays proposal to hold Miss U in PH