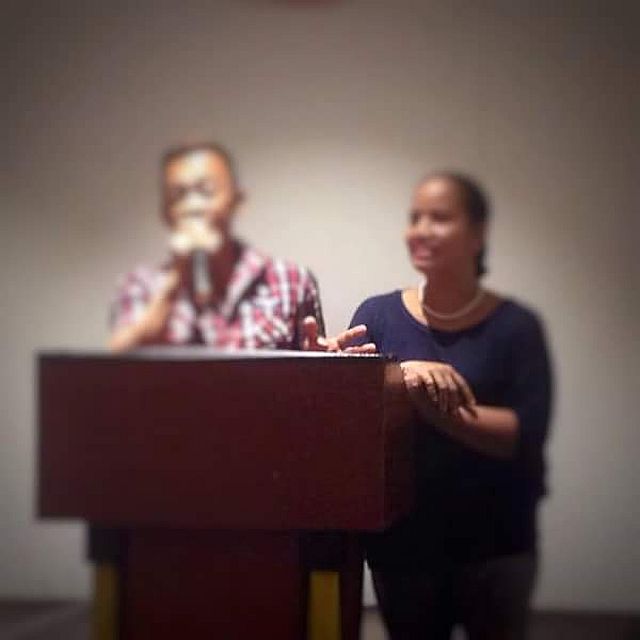 Rina and Gabby during the media seminar on AIDS and HIV reporting at Subic in Olongapo City. (CDN PHOTO/ CARMEL MATUS)

As the number of persons in the country diagnosed with human immunodeficiency virus (HIV) continues to grow, a 41-year-old HIV positive Cebuana mother is trying to prevent others especially women from suffering the same fate that she is going through.

Rina is among those who re-launched the group called “Babae Plus,” which provides HIV and community support services for women with HIV.

“I really wanted to help these women who have HIV and be their support group,” she told Cebu Daily News.

Rina was among the speakers at Subic Bay Travelers Hotel in Olongapo City during a media seminar for HIV and acquired immune deficiency syndrome (AIDS).

The “Babae Plus” is similar to the Cebu Plus Association Inc., whom Rina is a pioneer member.

Babae Plus has been established in 2004 but became inactive when the leader of the group died.

“We are now drafting the vision and mission. We really wanted this to launch not just in Cebu but in the whole Philippines,” she added.

They want the Babae Plus to become an organization that will provide seminar and support on reproductive health for women with HIV.

Aside from establishing a national organization, Rina also wanted to help more for the campaign on HIV and AIDS awareness in Cebu.

She is now coordinating with their local government unit (LGU) on how to address the campaign.

“I really want that each town will have its own support group. I will start in our own place,” Rina said.

How she got HIV

Rina was infected with HIV after she was sexually abused by the husband of her employer in Dubai, where she worked as a house helper more than a decade ago.

Her female employer, who was a human rights advocate, helped her to return to the Philippines.

But after that she ran a fever and diarrhea. A month later when she decided to go back abroad and underwent a medical exam, she found out that she had HIV.

Her world fell apartwhen she learned about the disease.

Rina experienced discrimination, but, later on, she met volunteers and underwent trainings.

She eventually accepted her fate and years later, she met her husband, Gabby, who has been HIV positive for 23 years.

Gabby, who is also a Cebuano, acquired the disease when he worked in a bar in Manila.

Rina and Gabby are blessed with two children, a 10-year-old and 3-year-old who are both negative of the disease.

Gabby said that they have strengthened their faith in God and underwent medical treatments to prevent their two children from acquiring the disease.
Gabby is also now an advocate on programs especially for men and encouraging them to get tested.

Statistics
HIV is a disease acquired through unsafe sex, sharing of needles, mother to child during labor and blood transfusion.

According to the data from the Department of Health and Research Institute for Tropical Medicine (RITM), 739 persons were diagnosed with HIV in May 2016.

The data also showed that Central Visayas ranked second with 108 cases in the country next to the National Capital Region.

Nine pregnant women between the age of 15 and 24 were also diagnosed with the disease: 6 from NCR, 2 from Cebu City and 1 from Iloilo Province.