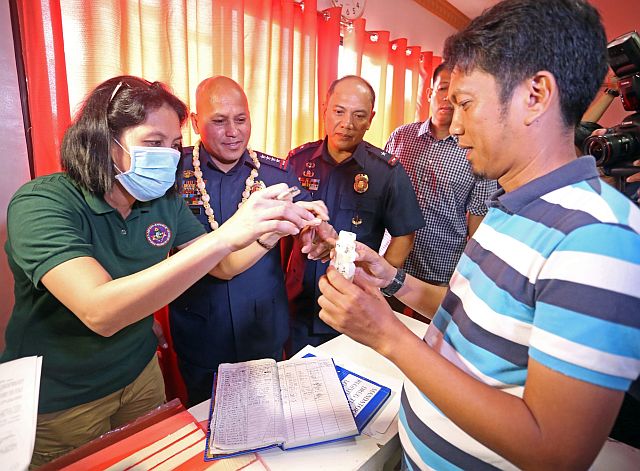 Some 28 journalists, covering the police and defense beat, volunteered to undergo a drug test after the press conference yesterday with the top police chief of the country at the Police Regional Office (PRO-7) headquarters in Cebu City.

“This is a very good example and a valuable gesture, so to speak. I hope this would set an example to other journalists,” a surprised Dela Rosa told the reporters before he supervised the conduct of the drug testing at the PRO-7 Media Center.

This was Dela Rosa’s first command conference here since his appointment as the PNP chief.

While journalists should be independent from any entity, including the PNP, Dela Rosa said the fight against illegal drugs involved everyone.

“You’re expected to be neutral, and perhaps some will think you’ll be biased in favor of the police. But if you notice any irregularity involving our policemen, I urge you to write about them or expose them to the public,” he said.

However, there were three journalists who refused to undergo the tests and left after the press conference.

A TV reporter said he had to leave to put together the story since they had an 11 a.m. deadline for their afternoon newscast.

A photographer was required to attend the Mass for their newspaper’s anniversary.

A broadcast reporter explained that he was needed at their station for their newscast at noon.

Arnold Bustamante, president of the Defense PNP Press Corps (DEPP), said he presented to PRO-7 the idea of having journalists undergo drug tests; but the procedure must be voluntary among reporters, photographers and videographers.

Bustamante, a reporter of dyHP, CCTN-47 and SunStar Superbalita, said journalists covering the police beat wanted to prove that they were one with the PNP in the campaign against illegal drugs.

“We keep on reporting about internal cleansing within the police force as well as the problem on illegal drugs. But how can we inform and educate the public if we ourselves hold questionable integrity?” he said.

Bustamante encouraged media companies and journalists assigned in other beats to also submit themselves to drug test to prove that members of the fourth estate are not into illegal drugs.

“Let us show to the public that we are clean and that they can still trust the media,” Bustamante said.

Results of the drug test for journalists will be released on Tuesday.

Dela Rosa lauded the gesture of the local media and challenged journalists in other parts of the country to do the same.

When he returns to Camp Crame in Manila, he said he will also suggest to journalists covering the PNP beat to also submit themselves to drug test.

Dela Rosa, 54, who is set to retire in 2018, also said they would need the support of all stakeholders, including the media, to end the spread of illegal drugs in the country.

Read Next
No cash aid for Team Rama execs