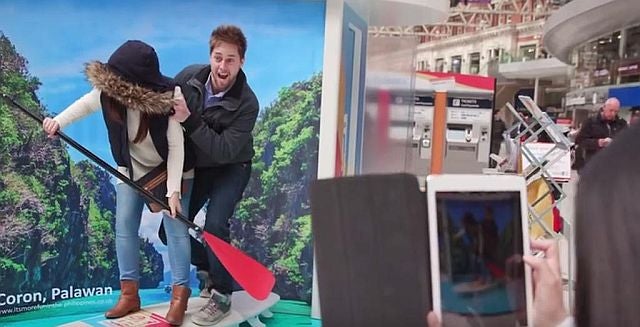 Rowena Montecillo, Tourism department’s Central Visayas director, says the DOT’s aggressive marketing like the “Fun in the Philippines” billboards and selfie booths at the Waterloo Train Station has helped in the growth of tourism in the country especially in Cebu. (DOT Youtube grab)

Visitors from China registered the highest growth rate among the five top foreign visitors in Cebu in the first four months of the year.

According to the Department of Tourism (DOT) report, 28,833 Chinese tourists visited Cebu from January to April this year, which is a 100.2 percent increase from last year’s number of Chinese visitors.

Tourism Central Visayas Director Rowena Montecillo said in an interview yesterday that she hoped the recent West Philippine Sea ruling would not affect this trend in the coming months.

“The Chinese market is very sensitive. But they can afford to travel and sometimes, it doesn’t matter what the government says anymore,” Montecillo said.

She said that the court ruling goes beyond tourism and should not have an effect on Chinese nationals wanting to come to the Philippines.

The Chinese tourists are just the fourth highest visitors in Cebu in this period since the top foreign visitors are Koreans (244,831), followed by Japanese (115,904) and Americans (50,261).

The Australians (16,258) are Cebu’s fifth highest foreign visitors within that period.

According to the DOT report, there were 1.7 million foreign visitors in Central Visayas from January to April this year, which is a 5.78 percent increase from the 1.6 million visitors in the same period last year.

Of this number, 1.2 million arrivals were logged in Cebu which is 4.12 percent higher compared to 1.17 million registered in 2015.

“This should now be the result of our marketing efforts. We are happy that Cebu and Bohol have always been, for the past years, included in the priority destinations when it comes to marketing,” Montecillo said.

She said that regardless of markets — US, Europe or Asia — Central Visayas has always been on the top of travel lists because tourists know how prepared destinations in the region are.

She said they expect more tourists to flock to the region, particularly Cebu, with the improvements on the terminal of the Mactan Cebu International Airport in the coming years.

The director also added that they are working very hard to introduce more products for tourists to see and experience in the region.

Siquijor registered the highest growth rate among the four provinces in Central Visayas, having seen a 52.8 percent increase in tourist arrivals in 2016 compared to the 20,513 logged last year.

“When we had our first quarter report (January to March), we actually reported 15 percent of our total target,” she said.

DOT 7 aims to attract 5.8 million tourists by the end of 2016, 1.4 million higher than figures recorded at the end of last year.

“Now, with the 5 percent increase for January to April, we are still positive we will hit our target, although it is a tall order,” she said.

Montecillo said she hopes all their marketing efforts as well as the participation of private stakeholders in past years will result to an increase in the number of tourist arrivals in the region.

Right now, she said that different carriers have really been helpful in attracting more tourists to Central Visayas.

She said that with more people becoming aware of cheaper direct flights to Cebu, more people will also get to see what the region has to offer.

“We have flights to Cebu via Taiwan from the US, Cebu direct from LA, and Emirate and Xiamen. Very soon within the year, we hope for two more direct flights to Cebu to help us with the numbers we need,” said Montecillo.

Read Next
Going beyond Oplan TokHang