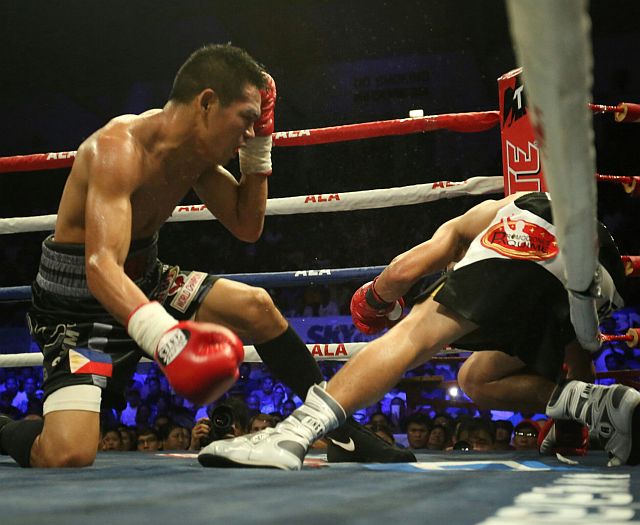 ‘King’ Arthur Villanueva checks his head after an accidental collision with Juan Jimenez in their first encounter last May 29 at the La Salle Coliseum in Bacolod City. (CDN PHOTO/LITO TECSON)

“KING” Arthur Villanueva and Mexican boxer Juan “El Penita” Jimenez will be settling an old score when they figure in a rematch in the September 24 Pinoy Pride fight card in StubHub Center in Carson, California.

The two fighters faced off last May 29 in one of the undercards of Pinoy Pride 36 in Bacolod City. Villanueva won the bout albeit in a controversial way.

“We all know how it ended up. I think both boxers deserve a chance to prove themselves again especially Arthur. The boxing fans also deserve the rematch,” ALA Promotions International CEO Michael P. Aldeguer said.

In their first encounter, Jimenez floored Villanueva in the second round but the ALA Gym stalwart came back strong and scored his own knockdown in the third round.

The controversial ending came in the fourth when the two boxers accidentally clashed their heads, knocking Jimenez unconscious in the process.
Referee Dan Nietes, however, didn’t see the clash of heads and awarded Villanueva with a knockout victory.

The win netted Villanueva the WBO Asia-Pacific Bantamweight title that likewise gave him his 29 wins with 15 knockouts against a single defeat.
That was Jimenez’s 10th loss to go with 22 wins and 15 knockout victories.

The Sept. 24 card will be headlined by Donnie “Ahas” Nietes.

Aldeguer clarified that contrary to some reports, Nietes’ opponent has yet to be finalized.

What was clear was that Nietes’ fight against WBO/WBA flyweight king Juan Francisco Estrada was moved to next year.

“We have not chosen any opponent yet but the September 24 fight will push through,” said Aldeguer. “Donnie has not decided yet if he wants to move up from 108-pound division to 112. We are waiting for his decision. If he already made his decision, maybe we can choose an opponent for him then.”

Read Next
BRONZE FOR UC JINS