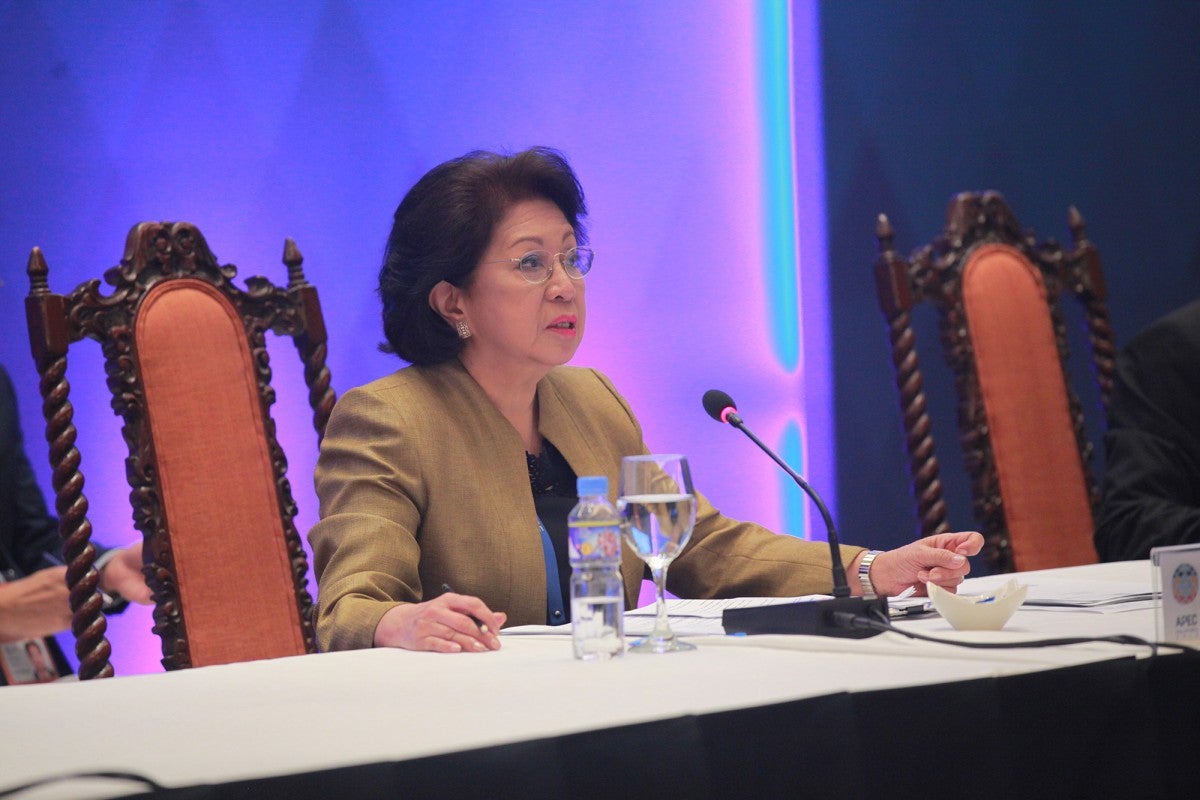 Ombudsman Conchita Carpio-Morales gives her opening remarks in a plenary session of the APEC Anti-Corruption and Transparency Working Group at the Marco Polo Plaza. (APEC 2015 OFFICIAL)

Ombudsman Conchita Carpio-Morales welcomed delegates as the Philippine host, urging the 23 member-economies to “fight the good fight” against corruption, a battle she said “cannot be won overnight.”

Morales  opened the plenary meeting of the Anti-Corruption and Transparency Working Group at the Marco Polo Plaza.

“The real anti-corruption work is not concluded, however, in grand conferences at plush hotels such as this one; it is a continuous struggle wherein the real work is done at the level of our respective member-economies,” she said.

About a hundred meetings covering various topics affecting free trade and economic growth will take place in Cebu until Sept. 11.

Officials repeatedly call APEC 2015 an opportunity to showcase Cebu as a prime destination for tourism and international conferences as  3,300 delegates and their companions come in and out for three-day visits in the next three weeks.

Extra policemen and traffic enforcers on the street showed the extra effort being made to secure guests, who will have closed-door meetings in four venue hotels in Cebu City — Marco Polo Plaza, Radisson Blu, Waterfront Cebu City  Hotel and the Marriott.

A protest rally outside the Radisson Blu lasted 45 minutes but remained peaceful. Policemen arrived, asking militants of Bayan-Central Visayas for their rally permit. The protestors walked on to the Mabolo church where they dispersed.

At the end of Day One, Cebu Gov. Hilario Davide III said everything “went well”.

“Beginning yesterday (Friday), the traffic was fine but it’s  a weekend. The real test will be on Monday, so we hope hapsay gihapon (it’s also orderly),” he told reporters at an evening reception for delegates at SM Northwing, where an  exhibit of fine Philippine-made products was opened, (Story on page 4).

“We told our police and our colleagues in the security committee that on Monday, they have to be on their toes,” he said.

A truck ban in Cebu City is also in force along the APEC ceremonial route until the  meetings are over.

In her speech, Morales said the SOM3 meetings in Cebu will consolidate work done in previous meetings of SOM1 in Clark, Pampanga  in January and SOM2 in Boracay last May.

In workshops and dialoges, delegates will also share their anti-corruption initatives and lessons learned from actual cases, she said as chairperson of the APEC Anti-Corruption and Transparency (ACT) Working Group.

The working group meetings in Cebu will lead to minister-level  and senior finance official-level meetings on structural reforms (Sept. 7 and 8), and finance (Sept. 10 and 11).

These are a prelude to the APEC Leaders’Meeting in Manila in November that will tackle issues related to trade and investment, services, counter-terrorism, mining, illegal logging, intellectual property, corruption, electronic commerce, health and life sciences,and market access, among others.

This year’s theme, with the Philippines as host, is “inclusive growth”, where economic benefits spread to all layers of society, as a means of building a better world.

“The war against corruption is not only a combat against corrupt forces but also a crusade to uphold public integrity as well as a campaign to enhance public trust,” said Morales.

“The long and narrow path towards integrity is not easy.  Along the way, some people may give up and yield to the tempting allure of easy money.  The battle against corurption cannot be won overnight.  It cannot be triumphed without determination.  Let us, therefore, fight the good fight.”