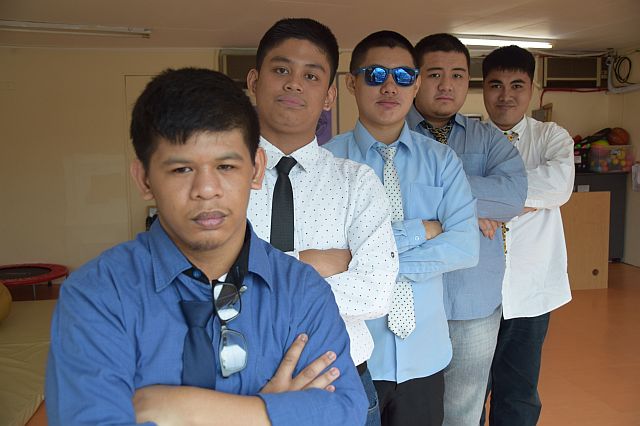 It was a rainy Thursday morning when five young men entered the playroom of The Center for Behavioral Support (CBS) located inside the Rafael Yu building on General Maxilom Avenue, Cebu City.

They were told that a writer is going to interview them for a newspaper that will feature their friendship and love for music.

That was enough to stir the atmosphere of the center into an excited state.

When they were told that their pictures would be taken to show the members of the band, James declared “this is the start of our world tour.”

All six of them were diagnosed with autism. But autism never stopped them from making beautiful music together.

Formed in 2014, On Point Band was the idea of Teacher Mark who saw the potential of students with autism to be more productive members of society.

“I refused to believe that children with autism are only limited to a certain level… that parents can only hope that they accomplish something but they are limited to some tasks because they are told they are only up to this level. To be honest, there is so much more that they can do,” he said.

Teacher Mark started his career in 2001 and saw the effect of music in capturing the attention of children with autism.

“I used traditional methods of getting their attention but nothing worked out. Then I brought my guitar. I started strumming during circle time and automatically, it captured their attention,” he said. 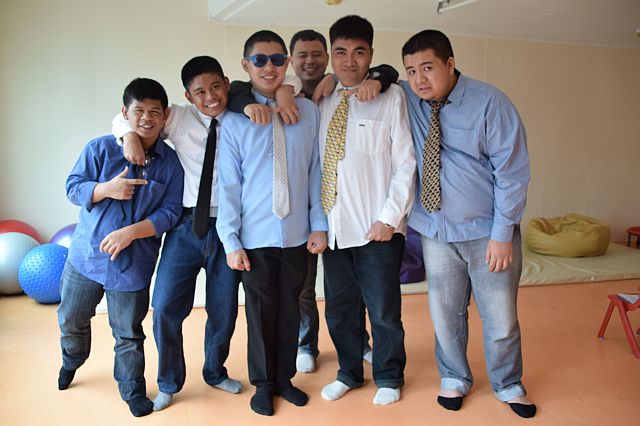 The boys with their mentor, Teacher Mark Saballa (fourth from left), who believes that persons with autism are gifted with natural talents that should be showcased to the public. CONTRIBUTED PHOTO

This experience has proven to him that music is indeed a universal language. It is a tool in improving students’ communication skills as they learn new words and imitate the correct pronunciation of certain words.

Teacher Mark knew most of the band members when they were only five years old.

Today, the boys are between 17 to 20 years and two of them – Jacob and Kalvin – are taller than Teacher Mark.

They have played in public places such as the Cebu Normal University and SM City Cebu.

Those performances were results of regular practices and patience on the part of Teacher Mark as getting the boys to focus was a major challenge.

“I saw that each one of them can make music. They just listen to a song and then they can play. No music sheets, no reading of notes… just plain listening to a song,” he said.

But when he put them together for the first time, Teacher Mark was faced with a challenge: each band member played on his own with no regard on how others sounded.

He made it a personal mission to help the boys realize that they are a team and a good team makes good music only when they listen to each other.

He guided them to stay focused so they would become better musicians.

If one bad member did not like the song they were practicing and insisted on having his favorite song played, Teacher Mark implemented the strategy of “contracting.” 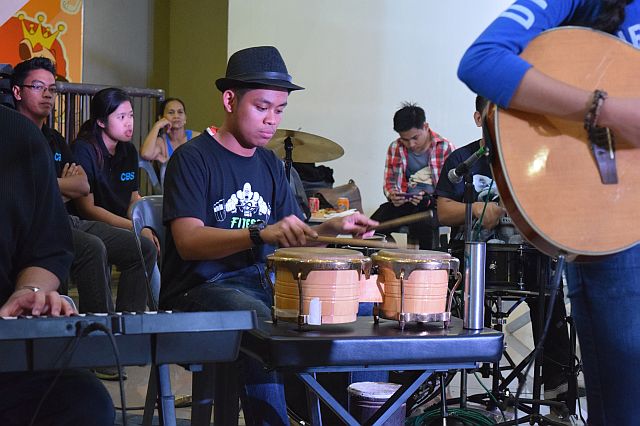 Aside from playing percussion instruments,
19-year-old Louie Aboloc loves to rap and dreams that the group can travel around the world to play music. (CONTRIBUTED PHOTOS)

“We finish playing the song first and then we will play his favorite song next. I tell them that as members of a band, we need to listen to each other,” he said.

And the boys listened and took his pieces of advice to heart.

It was Jacob, 19, who christened the band.

“We are On Point Band because that’s how we show our talent to other people. We sing, we play, we’re on point,” Jacob explained.

The boys are not just learning music.

They also learn life skills and values crucial in their growth as modern members of society.

Gabriel plays the guitar. He loves to sing and is interested to play in front of politicians.

“If they will listen to our songs, then they will be good persons and will not steal other people’s money. No more corruption,” he shared.

To James and Louie, going on a world tour is there ultimate dream for the band.

“North and South Korea are not friends so I think music can bring peace. War is bad, very bad,” said James.

Jacob, whose current favorite song is “A Thousand Years” by Cristina Perri, dreams to play at the Casino Español next time. 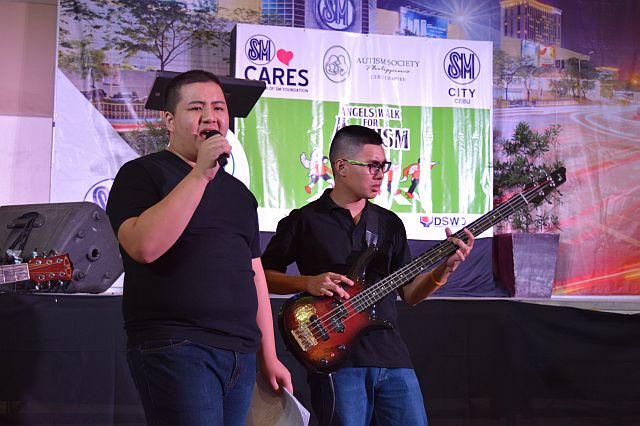 Jacob Ong (left) christened the band’s name On Point while Gabriel Luna (playing the guitar) said he wants the group to play in front of politicians. (CONTRIBUTED PHOTO)

“My Dad has been a member of Casino Español for 11 years and I want to sing there. I want to make my Dad proud,” he said.

Teacher Mark does not want the public to listen to the boys play just because they have autism.

He said people need to listen to the band because they are gifted musicians.

“I always ask myself the question: ‘How can I make their natural talents relevant to the audience?’ I don’t want them to go out in public half-baked because I won’t be able to give justice to their talents,” said Teacher Mark.

Teacher Mark said he was blessed to have supportive parents who allowed him to form a band with their children.

“Kalvin has more confidence in his performances. Socially, he has learned to be part of a group,” said Kalvin’s mother, Maria Carlina “Babylin” Roa.

Kalvin, who plays the keyboard and piano, was diagnosed with autism when he was two years and four months old.

“He didn’t have language by two years old. He didn’t understand instructions. It seemed like he can’t hear. He couldn’t imitate sounds and words. He didn’t have eye contact and he was a bit hyperactive and couldn’t focus,” she recalled.

Ms. Roa said Kalvin had summer lesson on playing the keyboard four years ago. He enjoyed it that he worked on his own to learn more songs.

But above all, he said spending time with his friends is his favorite part of being in a band.

“We (have) autism. We understand our friends. We are happy together,” Kalvin said, as the rest of his fellow band members clapped and cheered.